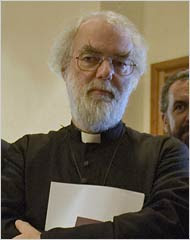 Anglican Archbishop Faults Factions
Bottom line: "In many ways, the letter was an acknowledgment that the Anglican Communion’s factions have fought to a standstill. A meeting of American bishops in New Orleans in September did not produce the clear reversal and apology that conservatives have demanded."
.
Nice quote from the Chicago Consultation: A recently formed group of liberal bishops, priests and laypeople from several countries responded to the letter. The steering committee of the group, the Chicago Consultation, said, “The archbishop’s lengthy letter contains not a word of comfort to gay and lesbian Christians.”
“We are especially troubled,” they added, “by the absence of openly gay members on the bodies that may ultimately resolve the issues at hand. The archbishop’s unwillingness to include gay and lesbian Christians in this process perpetuates the bigotry he purports to deplore.”
.
Posted by SUSAN RUSSELL at 7:48 PM

It helps, every once in awhile, to put our "troubles" in perspective. A comment by Bishop Walter Righter on the HoB/D mailing list about Michael Nazir-Ali, the current Bishop of Rochester (England), led me to look further into the history of the see of Rochester, and my memory was refreshed about the whole bizarre (I seem to be overusing that word these days, but perhaps its the times)... bizarre scenario surrounding John Fisher, the Bishop of Rochester who caused Henry VIII such consternation.

Man oh man... as wild as these duplicitous times are today,... well, we've come a long way. It helps to remember!

The linky for John Fisher.

From what I've read on the conservative blogs there isn't much comfort in the Archbishop's letter for conservatives either. Maybe the GLBT's can take some comfort from that reaction. And are there any representatives of the people who have been transformed from a gay lifetsyle on these bodies that may ultimately resolve these matters ? Surely in the interests of hearing all the voices that ommission should be just as troubling to Integrity and the steering committee

Brian -- define "gay lifestyle" for me.

The "gay lifestyle" violates the great fear of the puritans, that somewhere, someone, might be happy. For the opposite of the gay lifestyle, see the photo of Bp Schofield at the recent convention, or any recent shot of +Duncan's scowl!

So there it is, the gay lifestyle is being happy. Which explains why Sue-z and I, totally straight and boringly monogamous though we are, keep trying to live it.

Transformed from a gay lifestyle; hmmmm.

I never have had much use for Madonna, if that counts.