A number of news sources, including the Times UK are reporting that Foster:

"after guarding her private life fiercely for 15 years ... has publicly acknowledged her lesbian partner.

The Oscar-winning actress thanked "my beautiful Cydney" after winning an award at the Women in Entertainment Power 100 breakfast in Los Angeles. She went on to praise Cydney Bernard, saying the film producer "sticks with me through all the rotten and the bliss."

Despite more than a decade of speculation, questions over the paternity of her two sons and critics calling for her be “out and proud,” Foster has refused to discuss her sexuality. 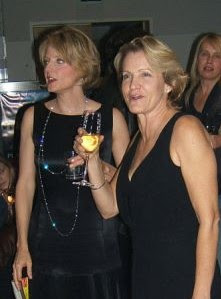 I say, better late than never.

And may they live happily ever after!

Posted by SUSAN RUSSELL at 5:24 PM

Maybe it's just me, but I thought everyone already knew this.
Aren't you already out when everybody knows what you are?
I guess this is news, I just don't get the big headline.
The first time I heard that Foster was gay was back in the 1990s and to my knowledge she has never disputed that.

I think Jodie Foster is an outstanding performer. I can think of no reason for wanting/needing information about a performer's private life unless that individual does something extreme/newsworthy, or personally wants the public to know.

The fascination with whether one is gay or straight is something that
usually fades with maturity (not to be confused with simply aging).

My response to the "why does it matter if she comes out" question is that by making the choice to be honest about who we love and how we live, LGBT people have a chance to offer models of healthy, loving relationships and break down the stereotypes that so many hold about "gay lifestyles."

Jodie Foster is an extraordinary talent and, by all reports, a great mom and loving partner. I think it is VERY good news that she is finally in a place where she is willing to share that part of her life with "her public."

"About five years ago, a friend of mine was sitting at home with her mother, watching TV. A brief clip of Elton John appeared. Mom said, totally earnest, "You don't think Elton John might be gay, do you?"

In short -- everything is news to somebody."

And there you have it.