The Color of Love

More from the Sunday paper ... this from the NYTimes Sunday Magazine tribute to Mildred Loving. 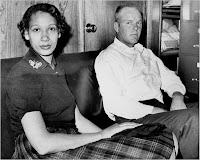 In June 1963, Mildred Loving, the 22-year-old wife of Richard Loving, a bricklayer, sat down with a piece of lined loose-leaf paper and wrote a letter in neat script to the Washington branch of the A.C.L.U. “My husband is White,” she wrote, “I am part negro, & part indian.” Five years earlier, they married in Washington, she explained, but did not know that there was a law in Virginia, where they lived, against mixed marriages. Upon arriving back home, the two were jailed, tried and told to leave the state, which is how she ended up back in Washington. Her request to the A.C.L.U. was heartbreakingly humble: “We know we can’t live there, but we would like to go back once and awhile to visit our families & friends.” A judge had told them that if they set foot, together, in the state again, they would be jailed for one year. She hoped to hear from the lawyer there “real soon.”

The letter didn’t mention the details of the arrest: the three local authorities who let themselves into her mother’s home one hot June night, invaded the bedroom where Mildred and Richard slept and woke them with the blinding glare of a flashlight. She didn’t express the humiliation of spending five nights in a rat-infested jail (her husband, because he was white, spent only one night behind bars). She didn’t try to convey just how homesick she was for the small, rural speck of a town in Virginia where she had lived with her family all her life, just down the road from Richard, who started courting her when she was just 11 and he was 17.

Their relationship was, by all accounts, an uncomplicated love affair in Central Point, Va., an area in which racial divisions were far from straightforward. She and Richard grew up attending segregated churches and schools, but outside of those formal arenas, blacks and whites, many of whom also had Cherokee blood, freely socialized, worked side by side (Richard’s father worked for a black landowner) and occasionally fell in love. Richard first met Mildred when he went to hear her brothers play music at her home down the road.

Two young civil rights lawyers took up the case, and in 1967 the ruling came down from the Supreme Court, written by Chief Justice Earl Warren: Declaring that “the freedom to marry has long been recognized as one of the vital personal rights essential to the orderly pursuit of happiness by free men,” Warren argued that the Virginia statute violated the 14th Amendment’s guarantees of equal protection and due process. An unforgettable picture captures the Lovings at a news conference in their lawyers’ office the day of the ruling: Richard and Mildred, their heads leaning close, his arm draped possessively around her neck, Richard looking gruff, Mildred looking girlishly delighted. More than triumph, more than justice, the picture captured, at a glimpse, a couple in love.

In the years following the ruling, the Lovings turned down countless requests for interviews, public appearances and honors. Mildred Loving had no affiliations beyond her church and her family and never considered herself a hero. “It wasn’t my doing,” she said a year before her death. “It was God’s work.”

She resolutely lived out a private, ordinary life with its ordinary pleasures — a happy marriage, three kids, a home near family — and its sadly ordinary tragedies. One day when Mildred was 35, she and Richard were driving on a highway when another car crashed into theirs. Richard was killed instantly. Mildred, who lost her left eye in the accident, never remarried or considered it. She spent the second half of her life attending church, cooking for children and grandchildren, smoking unfiltered Pall Malls, drinking cup after cup of instant coffee with the neighbors and looking out from her back porch to a peaceful view of the fields.

Civil rights historians had pretty much accepted that they wouldn’t hear again from Mildred Loving. But last year, the 40th anniversary of the ruling, three colleagues working on behalf of Faith in America, a gay rights group, visited Loving at the small ranch house that Richard built after they moved back to Virginia. The organization was hoping to persuade her to make a statement in favor of gay marriage at a celebration of her own court ruling that the group planned to hold in Washington. “I just don’t know,” Loving told them. She hadn’t given it much thought. She listened sympathetically, a worn Bible on her end table, as the group’s founder, the furniture entrepreneur Mitchell Gold, told her of his own struggles as a teenager to accept that society would never let him marry someone he loved. She was undecided when the group left a few hours later, but told Ashley Etienne, a young woman who consulted for the group, that they could continue to chat about the subject over the phone.

Etienne, who said Loving reminded her of her own grandmother, started calling every few days. She asked Loving about how she and her husband endured their setbacks; Loving told her that she didn’t understand why two people who loved each other could not be married and express their love publicly. She talked, as she always did, about how much she loved Richard and what a kind, gentle man he was. On her own, she talked to her neighbors about the request; she talked to her children about it. And in the end, Loving told Etienne, yes, she would allow the group to read a statement in her name supporting gay marriage at the commemoration. “Are you sure you understand what you’re saying?” Etienne asked. “You understand that you’re putting your name behind the idea that two men or two women should have the right to marry each other?”

I have just returned from a visit to my husband's family who are good people, but every visit is a "talking across the divide" experience. AFter returning home, at dinner tonight I mentioned to my husband that I long to be with "like minded" folks...and then I opened this blog to read this beautiful and poignant story. I want to send this to my in-laws, and my sister and brother in law (who are both fundamentalist pastors)...so maybe I will send it along via snail mail. Thanks for this!
gp

What a beautiful Christmastide/New Year's gift this post is, Susan. Thank you.

“the freedom to marry has long been recognized as one of the vital personal rights essential to the orderly pursuit of happiness by free men,” -- at one point, it would appear that the Supreme Court understood.