Thoughts on "Stir It Up" Sunday 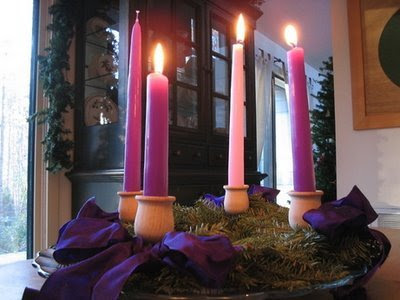 Collect of the Day for the Third Sunday of Advent

Stir up your power, O Lord, and with great might come among us; and, because we are sorely hindered by our sins, let your bountiful grace and mercy speedily help and deliver us; through Jesus Christ our Lord, to whom, with you and the Holy Spirit, be honor and glory, now and for ever. Amen.

I'm not preaching tomorrow -- the rector's up -- but reflecting on some of the events of the past week I found myself revisiting "the ghosts of sermons past" and decided to reprise this excerpt from the sermon I preached on the texts for Advent 3B the last time they came around:
To walk the way of the Lord IS to “stir things up:” that path made “straight” (so to speak!) is the hard won path hacked through the wilderness of all that keeps the Kingdom of God from coming – that keeps the Reign of God from being realized. War and violence. Hatred and oppression. Injustice and bigotry. Hunger, fear and sadness. When God’s power comes among us with great might it is the force that gives US the power to challenge all of these and more – it is the power of what God would have us become that brings us – again and again -- smack up against “the powers that be.”

I guess that’s why I guess I continue to be flummoxed by those who think there either is or should be some kind of disconnect between what we do here on Sunday and how we live our lives the rest of the week. Surely I’m not the ONLY one who has a friend, a relative, a neighbor or co-worker who thinks that “stirring things up” is somehow … well, unseemly.
.
I'm thinking of those sincerely Christian folk who are busy emailing everybody they know about how important it is to put Christ back in Christmas and seem content to leave him there: to worship the chubby baby in the Bethlehem manager rather than follow the inflammatory preacher in the Nazareth pulpit.
Those who describe All Saints as “that political church” as if that’s a bad thing; as if in challenging the systems that foster oppression, that make war, and that perpetuate violence is anything other than following in the footsteps of those who’ve gone before us: of Isaiah and John and Jesus … of Martin King and Desmond Tutu and Rosa Parks.

My brothers and sisters, “stirring it up” is part of the DNA of All Saints Church – it is a foundational element in what is nothing less than the meaning of our lives together as a community of faith. And I believe that we are called on this Third Sunday in Advent to both claim and proclaim that heritage – to continue stirring things up – to partner with the Spirit of the God who has anointed us to shine that light we have been given into the lives of those desperate for the hope it brings.

Toward that end, I want to share this morning a story from one of my favorite writers: Robert Fulghum of Everything I Ever Needed to Know I Learned in Kindergarten fame. It’s a story about a Greek philosophy professor.
It seems that it was his custom to end each lecture by asking the class, “Are there any questions?” One day a student raised his hand and – half-jokingly said, “Yes … what is the meaning of life?”
The professor replied, “I will answer your question,” pulled a small hand mirror out of his pocket and told this story:
.
=====
"When I was a small child, living during the war [WWII], we were very poor and we lived in a remote village. One day, on the road, I found the broken pieces of a mirror. A German motorcycle had been wrecked in that place.

"I tried to find all the pieces and put them back together, but it was not possible, so I kept only the largest piece. This one. And by scratching it on a stone I made it round. I began to play with it as a toy, and became fascinated by the fact that I could reflect light into dark places where the sun would never shine - in deep holes and crevices and dark closets. It became a game for me to get light into the most inaccessible places I could find.

"I kept the little mirror, and as I went about my growing up, I would take it out in idle moments and continue the challenge of the game. As I became a man, I grew to understand that this was not just a child's game but a metaphor for what I might do with my life. I came to understand that I am not the light or the source of the light. But light - truth, understanding, knowledge - is there, and it will only shine in many dark places if I reflect it.

"I am a fragment of a mirror whose whole design and shape I do not know. Nevertheless, with what I have I can reflect light into the dark places of this world and change some things in some people. Perhaps others may see and do likewise. This is what I am about. This is the meaning of my life."
====
The meaning of his life – and the meaning of ours … if we are willing to pray to be “stirred up” by the Spirit of the God who calls us to stir things up by proclaiming the year of the Lord’s favor – in and out of season.
.
For there was a man sent from God, whose name was John. He came as a witness to testify to the light. He himself was not the light, but he came to testify to the light. And in this holy season of Advent preparation let’s not lose sight that the one for whose coming we prepare is for us the incarnation of that light that is for ALL nations and for ALL people.
.
Posted by SUSAN RUSSELL at 10:01 AM