This is one of those "three degrees of separation" stories ... wherein my friend Ellen Snortland wrote a story in this week's Pasadena Weekly about All Saints Church parishioner, Gloria Killian -- which gives me a chance to get her story out and enlist your help in helping her make Christmas a little brighter for some of the "least of these" -- women in prison. 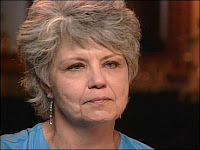 William Shakespeare might as well have been writing about a friend of mine when he wrote, “Be not afraid of greatness: some are born great, some achieve greatness and some have greatness thrust upon them.” Six years ago, many of us became aware of Gloria Killian, a new Pasadena resident and now my friend. Killian was released after 16 years of being wrongfully imprisoned for a homicide she had purportedly masterminded. (Reflect for a moment about 16 years of YOUR life being wasted.) I wrote about her, Steve Lopez of the LA Times wrote about her, and Killian was a guest on many television talk shows. Talk about having greatness thrust upon you.

Gloria could justifiably be bitter and hostile now, stewing over the 22 years she spent working at clearing her name and sitting in prison. Instead, she has taken her tragic circumstances and turned them into goodness — and yes, some greatness — for others.

Killian is now the executive director of the Action Committee for Women in Prison (ACWIP), as well as a spokesperson for the exonerated. These are people who are officially cleared of any wrongdoing, as distinct from “pardoned,” meaning the prisoner or ex-felon is “forgiven.” She has been a champion for some of the most voiceless citizens in our society: prisoners and, by extension, the children of incarcerated mothers. While many of us have been embroiled with the issue of Proposition 8, the anti-gay marriage initiative, Killian deals daily with the defeat of Proposition 5, a lesser-known initiative which proposed rehabilitation instead of prison for nonviolent drug offenders. The majority of women in prison are nonviolent drug offenders, thus the dire need for ACWIP.

The cost of imprisonment is stunning in both monetary and human terms. There are approximately 13,000 women in the prison population of California. When you consider that it costs $46,000 per year to imprison someone, and it costs a lot less to put them through rehab, you begin to see how inefficient it is to imprison a drug addict.

The human costs are even larger. Consider this: 75 percent of the women in prison have children. That means there are not only the costs of incarcerating a mother but the “collateral” costs of foster care and other strains on an already burdened social support system.

Why do you think Proposition 5 lost? As in most things that are illogical and unjust, just follow the money. Not a lot of people understand how powerful the prison guard lobby is, not only in California but nationwide. There are big bucks and salaries at stake. There are vested interests in keeping the prison business a growth industry. Frankly, the idea of making profits off warehousing people makes me sick. The guards have the bucks to influence an election. Prisoners have only their underfunded champions, like Gloria.

Each year since Gloria has been out, she’s partnered ACWIP with All Saints Episcopal in Pasadena to provide holiday gifts for the women locked up at the California Institution for Women, and the 300 women working in the Fire Camps. ACWIP also focuses on their kids, many of whom have no other source of holiday presents. “We will be giving toys for the Christmas tree at the prison so the children who come to visit their mothers in prison will receive gifts,” Gloria said. She’s committed to increasing the number of $10 gift cards for the often forgotten teenaged daughters and sons. “We accept unwrapped new toys and then, for the mothers, we collect small items that are useful,” she said. Useful items include things you can associate with the “give-away” items in hotels: small lotions, soaps, conditioners, deodorants, toothpaste, toothbrushes, dental floss, lip balm, hair ties, stationery, greeting cards, small packets of coffee, tea, cocoa and candy.

Because of the economy, Gloria says, they are way behind in the collection of gifts for women as well as kids. She said that last year, by the first week after Thanksgiving, their donations were about twice the amount they have this year.
As a side note, Gloria Killian has a bittersweet gift of her own to relish for this holiday season. The rabid Sacramento prosecutor, Christopher T. Cleland — responsible for withholding evidence that could have exculpated Gloria from the beginning — has been formally admonished by the California State Bar for misconduct in her case. Yes, it’s too little, too late … but it’s better than nothing.

Meanwhile, Gloria’s ardent advocacy for women in prison continues. You can help with money or gifts. Sometimes it’s not the great big acts that are so important as the tiny acts of goodness. While you’re shopping, think of ACWIP and throw a $10 gift card into your basket. Or when you’re shopping for toys, grab an extra one. Since Gloria had greatness “thrust” upon her from transcending the injustice of her 16 long years in prison, she knows how to transform lots of little things into greatness for others.

Posted by SUSAN RUSSELL at 8:10 PM

Punishment--of anyone, for any reason--is counterproductive. While I can understand separating dangerous people from the rest of us for safety reasons, the separated should be treated humanely and while separated the emphasis should be on changing their conduct from dangerous to non-dangerous. This whole idea of retribution and penalizing people for wrongdoing is alien to the spirit of the Gospel. Punishment is not the answer for crime. If it was the recivism rate would be zero and crime would disappear. All punishment does is make the punished hostile. The Christian agenda needs to include a paradigm change in how we deal with crime as a society. If I ever am privileged to realize my dream of becoming a bivocational lawyer-priest, that's what my ministry will be.