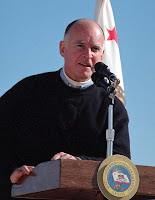 In a surprise move, state Atty. Gen. Jerry Brown asked the California Supreme Court on Friday to invalidate Proposition 8. He said the November ballot measure that banned gay marriage "deprives people of the right to marry, an aspect of liberty that the Supreme Court has concluded is guaranteed by the California Constitution."

It is the attorney general's duty to defend the state's laws, and after gay rights activists filed legal challenges to Proposition 8, which amended the Constitution to ban same-sex marriage, Brown said he planned to defend the proposition as enacted by the people of California.

But after studying the matter, Brown concluded that "Proposition 8 must be invalidated because the amendment process cannot be used to extinguish fundamental constitutional rights without compelling justification."

Backers of Proposition 8 expressed anger at Brown's decision not to honor the will of voters, who approved the measure in November. "It's outrageous,"said Frank Schubert, campaign manager for Proposition 8.

Proposition 8 foes, however, were elated. "Atty. Gen. Brown's position that Proposition 8 should be invalidated demonstrates that he is a leader of courage and conviction," said Geoff Kors, executive director of Equality California.

In his brief to the high court, Brown noted that the California Constitution says that "all people are by nature free and independent and have inalienable rights," which include a right to "privacy."

The courts have previously said the right of a person to marry is protected as one of those inalienable rights, Brown wrote. The question at the center of the gay marriage cases, he told the justices, "is whether rights secured under the state Constitution's safeguard of liberty as an 'inalienable' right may intentionally be withdrawn from a class of persons by an initiative amendment." That, he concluded, should not be allowed.

Maybe I've just become a total cynic about these things, but I just can't jump on the bandwagon to congratulate Jerry.

Although I will admit that his timing is impeccable. (And not just that he found his backbone so shortly after Diane Feinstein gets the Senate chairmanship that will likely keep her out of the race for Governor in 2010)

Combined with the move to invalidate the 18,000+ marriages (also impeccable timing, the week before Christmas -- very Christian, lovely indeed) -- these two legal filings pretty much guarantee that the Rick Warren debacle isn't going to fall off the radar as quickly as the Obama camp was hoping (and it's already been on the radar far longer than I think even they expected).

And although I loathe the role of victim, we really couldn't look more tragic at the moment if we tried...talk about being kicked when you're down, then kicked again, and again.

This is HUGE! The Court will attach great weight to an argument advanced by the A-G on behalf of the State of California.

I thought that Governor Moonbeam would find himself in an untenable position having to defend Prop 8 as CA Attorney General. He seems to have come up with a creative solution to the cognitive dissonance.

What struck me in the LA Times article was this blustering statement on the part of the pro Prop 8 faction. The law "commands judges -- as servants of the people -- to bow to the will of those whom they serve -- even if the substantive result of what the people have wrought in constitution-amending is deemed unenlightened," they argued.

I am not the lawyer, my older sister is. She holds a Licenciatura in Law in Mexico and a JD from the former National University School of Law in San Diego. She explains to me that this is such a dishonest statement on the part of a US attorney. That the independence of the US judiciary is a foundational issue in US jurisprudence and a cornerstone of the checks and balances inherent in the US system of law.

It is a system of law to which we who suffer corrupt lawyers and judges daily aspire for our nations.

I am a lawyer and I can tell you, that statement from the Prop 8 supporter is absurd on its face. If the person who made it is a lawyer, he or she is incompetent and should be disbarred.