RonF ... a frequent commenter on this blog ... asked a question last week in reference to my "Man Behind the Curtain" analogy that didn't get answered. So here you go, Ron ... a little tutorial in Gay Culture-Speak: 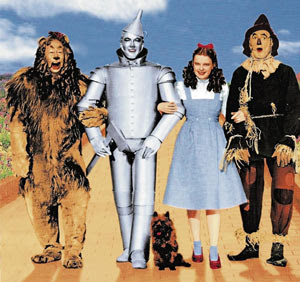 Per your request for clarification "Friends of Dorothy" is code for ... to put it succinctly ... "gay."
.
It is reminiscent of when early Christians drew a fish in the dirt to "out" themselves and if another Christian recognized the symbol they knew it was a safe place. It's the kind of code that gets developed when people are forced to live in fear that if you REALLY knew who they were they would be in danger. It is not unlike the slaves who sang about the Promised Land and got away with it because their masters thought they were talking Bible when what they were really talking about was liberation. It's the kind of reference the oppressed recognize right away and the oppressors go "huh?"
.
Hope that helps.
.
See also: Pink Triangle and Rainbow Flag
Posted by SUSAN RUSSELL at 10:48 AM

The whole idea of homosexuality being normal and healthy is the grandest and wildest hoax since the Mississippi Scheme or the South Sea Bubble of the 18th Century.

Clearly THIS "anonymous" (ives UNDER (not "somewhere over") the rainbow.

Thanks for the info I'd never heard of.

I'm fond of the "in the family" metaphor, as in "Is she one of the family?"

"Friend of Dorothy" - like "drop a hairpin" or "drop a feather" - only seems to work for persons of a certain age (tm) and being one of those persons, I've grown tired of the kiddies' comments. :-)

I also like the "family" descriptor. I agree,. "friends of Dorothy" is rather dated, but still useful. You see it for example on cruise ships, where there is often a "friends of dorothy" cocktail party arranged and announced in the cruise newsletter.

and of course, for women, there's always the question as to whether she's Lebanese.... (which comes from a famous Ann Landers/Dear Abby column of years back).

Thank you, Susan, for your response (and for being responsive!). I gather from the posted commments (and Suzer's comment on the previous thread) that while this usage was in vogue some time ago, it is not so common these days.

I didn't click though the other two links; I'm quite familiar with the history of the utilization of pink triangles (back to the Nazis and through to the present day) and the rainbow flag.

The latter reminds me of something that happened a while back. I am associated with a Cub Scout Pack. A gentleman who had been Cubmaster for 6 years died, quite unexpectedly, leaving behind a widow and 3 sons of Scouting age, a couple of whom have diabetes. It was a blow to everyone and a very sad thing. The Pack wanted to memorialize him, and they came up with the idea of ribbons. They were going to sell them at the Blue and Gold Banquet (the annual Pack dinner) and donate the money to the Diabetes Foundation.

I was present at the Pack Committee meeting when a bunch of suburban Chicago soccer moms were trying to work out the details. They came to color; what color should the ribbon be? Pink's taken by breast cancer, yellow for supporting the troops, etc., etc. Say; how about a rainbow ribbon?" I sat there wondering, "Should I say something?" Nope. I kept my mouth shut. In fact, I was highly amused by what the reaction would be down at the local Scout office when a bunch of Scouts and Scouters ended up wearing rainbow ribbons as part of their uniforms for a year.

This may seem literally incredible to you all, but I assure you none of these folks had a clue, not one.