Prayers for Diana, Princess of Wales 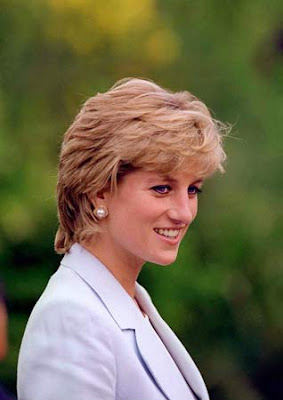 God our Father, we remember before you Diana, Princess of Wales, and offer you our gratitude for all the memories of her that we treasure still. Her vulnerability and her willingness to reach out to the excluded and forgotten touched us all; her generosity gave hope and joy to many. May she rest in peace where sorrow and pain are banished, and may the everlasting light of your merciful love shine upon her; through Jesus Christ our Lord. Amen.
===========
The prayer was penned by the Archbishop of Canterbury -- and prayed today by countless people around the world who today remembered the "the people's princess" on this the 10th (Oh my goodness, where did the years go?) anniversary of her untimely death.

I was one of those who set the alarm and got up in the middle of the night to watch the fairy tale "wedding of the century" when Diana Spencer married her Prince Charming. I was pregnant with Jamie when she was expecting Prince William and Brian was born just months from Prince Harry. I guess it's the nature of celebrity that we think we "know" people who are in the limelight but the deep chord her death struck in so many, many people around the world was a real examplar of how "those whose lives are closely linked to ours" has come to mean something very different in this world of instant communication and and 24/7 media.
.
Rest in peace, Diana -- and rise in glory.
Posted by SUSAN RUSSELL at 5:58 PM

I remember getting up just a tad later to watch the wedding. I also remember preparing to return home from a holiday when I heard the news about her death. I just sat there on the bed in the room I was in - stunned beyond words. When I returned home, the Anglican Church I was attending was asked to do a memorial service.