So it's about 103 in Pasadena again today -- good weather for lolling around, reading, resting and basically waiting for it to cool off. Channel surfing I came across one-after-the-other "Tributes to the King" on this the 30th Anniversary of His Going to Glory. That of course would be ... 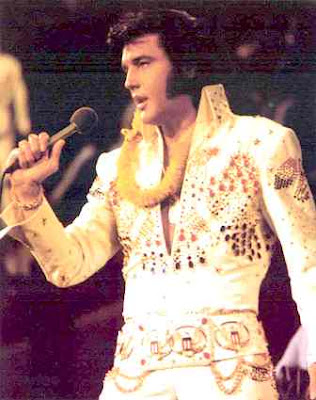 30 years later they're still lining up at Graceland on the anniversary of his death. Who knew? How about you? Anybody still remember where they were when they heard that Elvis had gone to glory? Was it a big deal or a footnote? And anybody else sitting there wondering where on EARTH those 30 years have gone?
Posted by SUSAN RUSSELL at 5:45 PM

I'll answer my own question ... I was not long out of college and working at a Savings & Loan in Camarillo CA saving up money to go to law school (never went -- long story) and a customer at one of the teller windows broke the news. The teller broke into tears, another teller fainted and they ended up sending both of them home for the day and I had to go over from New Accounts to the teller line and help "balance out" (not something I was very good at so I remember that part well.) I thought it was sad, not surprising and just didn't "get" all the drama. I guess I was just young enough that the Beatles were the big deal musically for me -- I kind of missed the Elvis-mania.

I was standing in the Walgreen's not a mile away from Graceland--it's actually located on Elvis Presley Blvd.--when I heard the news. I was 14.

It was a BIG deal. My grandfather was a landscape architect who did work for Elvis. My family lived in the neighborhood behind Graceland.

I was not an Elvis maniac, but he was such an icon in Memphis. His passing was, as you said, sad, but not surprising.

Reading later accounts of his life (particularly his almost pedophiliac relationship with Priscilla), took a lot of the shine off of him, I'm afraid.

But I hope that he rests in peace and will rise in glory. There are certain of his songs that still get me..."In the Ghetto" being one of them.

Elvis mania is something I could never understand. He couldn't sing on pitch and he wasn't particularly attractive to me. I was a Pat Boone fan as were most of my friends.

Today I really wonder about the Elvis fanatics. I guess I don't understand what all the fuss is about and why all those people don't have anything better to do. But I'm just an old curmudgeon.

I am an old folkie. I never got the entire Elvis hoopla. The guy was a fair country singer, a medium at best actor and somehow captivated a generation. I have no idea where I was when I heard about his passing. I recall being sad in the way one is whenever one hears of a death too young. But certainly I was not moved to tears or anguish.

May he rest in peace and rise in glory.

I was working in my Dad's TV repair shop. A customer came in and told me Elvis had died. Being a butthead kid, I said, "Elvis was still alive?"
The punk stuff was just happening and that was what interested me.
But now I've listened to early Elvis stuff and have to admit, he was pretty cool. Too bad he had to die in the toilet!
I will admit that I was more upset about John Lennon's death a few years later. And, of course, Johnny and Deedee Ramone's deaths.