Time for Gomez to join Gonzales and GO!!!

Resignation is all the rage in Washington this week -- with Alberto Gonzalez FINALLY stepping down, Tony Snow leaving the White House press staff and don't even get me started on Larry Craig.

Now it's catching on in church circles as The Anglican Centrist and PRELUDIUM are both calling for Archbishop Drexel Gomez to do the right thing (I know, what are the odds???) and step down as head of the Anglican Covenant Design Group. 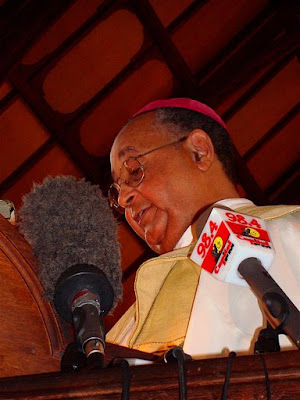 Why? Glad you asked ... Let's start the "centrist" position:

As much as I am a Windsor type of Anglican/Episcopalian -- and in fact because I am -- I don't want to be seeing the person in charge of the Covenant Design Group preaching at a schismatic event. This is the last nail in the coffin in which his credibility is buried -- as far as I or any other Windsor-minded true centrist is concerned. Yes, we recognize the need for a way forward, yes we recognize the Episcopal Church is a mess, yes, so is the wider Communion, and yes, we think the Windsor report and process were the best way forward. The constant work at undermining the process toward reconciliation, however, has been done unrelentingly by the far right -- unrelentingly -- and whatfew piddling objections have been offered by the far left -- do not compare to what works of schism and realignment the Separatist faction hath done in the past three years.
.

At the ordinations of Bishops Atwood and Murdoch in Kenya Thursday August 30 the Archbishop was preacher. One assumes he preached from a supportive position. I presume he took part in the laying on of hands. His participation in these ordinations makes it clear that he has moved on from any thought that the current Province called The Episcopal Church will continue as part of the Communion. These bishops will join with the Common Cause Partnership in September and will be working out plans for an emerging entity that will claim to be the “real” Anglican province in North America. Who knows if they can pull it off, but if they do they will be looking for a covenant that TEC could not possibly sign precisely so that they will be seen to replace the no longer orthodox province of The Episcopal Church.

That being the case, he should resign as chair of the Covenant Design Group (CDG) or should be asked to go. That group is responsible for the difficult but important work of developing a covenant or charter for life together in the Anglican Communion, one which would challenge the church to mission and define with greater clarity what is required of member churches concerning mutuality and interdependence.

How can the Archbishop, in good conscience, return to the tasks of the Covenant Design Group having made it increasingly impossible for that work to proceed, even for the next year?

The question for the Archbishop is this: Have you no sense of honor? If you do, it is time to keep it intact.

The Covenant Process was always a sill dream. With Gomez in charge, it was a nightmare.

Now, I'm the one looking like the flight attendand at the door doorway of the USS Ship of Fools saying, "Buh bye."