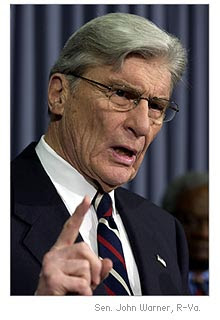 Warner Calls for Pullouts By Winter

Sen. John W. Warner, one of the most influential Republican voices in Congress on national security, called on President Bush yesterday to begin withdrawing U.S. troops from Iraq in time for Christmas as a new intelligence report concluded that political leaders in Baghdad are "unable to govern effectively."

UPDATE FROM WASHINGTON - The Associate Press is reporting:

Sen. John Warner's suggestion that some troops leave Iraq by the end of the year has roiled the White House, with administration officials saying they've asked the influential Republican to clarify that he has not broken politically with President Bush.

But Warner said Friday he stands by his remarks and that he took no issue with how his views have been characterized.

DOUBLE Good for him!!

Posted by SUSAN RUSSELL at 8:37 PM