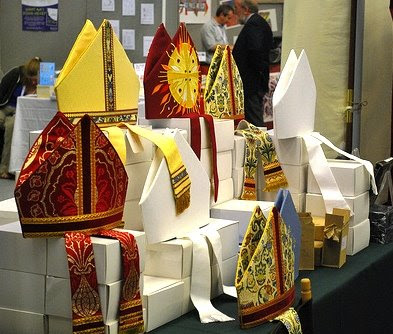 As the marriage equality movement continues to make headway across the country, Episcopal Bishops are stepping up in support.

From testimony from Maine's Bishop Stephen Lane:
The Episcopal Church, long ago, concluded and publicly proclaimed through its own legislative body that gay and lesbian persons are children of God and, by baptism, full members of the church. We have also concluded that sexual orientation, in and of itself, is no bar to holding any office or ministry in the church, as long as the particular requirements of that office or ministry are met. And we have repeatedly affirmed our support for the human and civil rights of gay, lesbian, bi-sexual and transgendered persons. In many of our congregations, both here in Maine and around the country, faithful same sex couples and their families are participating in the life of the church and sharing in the work of ministry and service to their communities.

If we, as Mainers, believe that faithful, lifelong monogamous relationships are among the building blocks of a healthy and stable society, then it is in our interest to extend the rights and obligations of civil marriage to all Maine citizens. To deny those rights to certain persons on the basis of sexual orientation is to create two classes of citizens and to deny one group what we believe is best for them and for society.
.
The Episcopal Church continues its conversations about doctrine in relation to same sex marriage and the blessing of same sex relationships, and there is yet no consensus. We continue to search for ways to honor the varied viewpoints of all our members and to provide a place of dignity and respect for each of them. Therefore, I also affirm that part of L.D. 1020 that states there will be no effort to compel or coerce any minister to act in a way contrary to his or her belief and conscience. There will certainly never be any requirement in the Episcopal Diocese of Maine to act in contravention of conscience or of church doctrine. It is my expectation that The Episcopal Church will continue to engage in this conversation for some years, even as I hope the rights and responsibilities of civil marriage will be extended to all Maine citizens.

Meanwhile:
In New York State, Bishop Prince Singh (Rochester) attended today's marriage equality rally at the Albany State House;
In Iowa, Bishop Alan Scarfe, endorsed his state’s move in support of gay marriage in a Good Friday pastoral letter to the diocese, saying the ruling “clarifies for me what the issue is that is facing the Church. Like so many who support the rights of gay and lesbian people, I thought civil unions would provide adequate protection for their relationships. I began to see things differently as I heard the arguments presented in court several months ago.” ...
In Vermont, Bishop Tom Ely "applauded the vote saying he hoped it would “inspire other states to enact comparable legislation and that ultimately the legal provisions of full marriage equality will be provided to all citizens of the United States.”..
At this point, four states (Massachusetts, Connecticut, Iowa and Vermont) have legalized same-sex marriage and 10 others (California, New Jersey, New Hampshire, Oregon, District of Columbia, Washington, Hawaii, Maine, Maryland and Colorado) have domestic partnerships or civil unions -- with New York, Maine & New Hampshire on the cusp of marriage equality and California awaiting their Supreme Court decision..
That means TWENTY EIGHT dioceses of the Episcopal Church now have members within their jursidiction calling on their church to provide pastoral care in the celebration and blessing of their unions. If you are among them, write or call your bishop TODAY and tell him or her that you are counting on them to work with us in Anaheim to put this church on the right side of history on the issue of marriage equality.
.
We need our bishops to KEEP stepping up ... and as we move toward General Convention and the pressure for them to step back let's make sure they're in our prayers and we're in the "inbox" encouraging them to keep on moving this church forward toward that full and equal claim its been promising the gay and lesbian faithful since 1976!
Posted by SUSAN RUSSELL at 10:06 AM