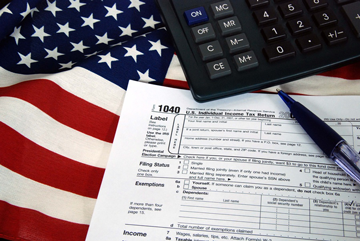 via email from California Faith for Equality:

“As we rush to the post office to send in our tax dollars today, let us remember those gay and lesbian families who pay their taxes lawfully and faithfully, yet have been denied equality under the law by a majority of voters in California,” said Samuel M. Chu, Interim Executive Director of California Faith for Equality and a Presbyterian pastor. “Our gay and lesbian brothers and sisters have equal responsibility under the law, but not equal rights. I speak on behalf of a diversity of faith leaders committed to equality and our respective faiths all agree that to take away the rights of any minority group, as did Proposition 8 here in California, is wrong.”

Rabbi Denise Eger, of Congregation Kol-Ami in West Hollywood and one of the founding members of California Faith for Equality said, “Gay and lesbian married couples face continued discrimination at both federal and state levels. While some couples can file in their states as ‘married,’ they are required to file on the federal level as ‘single’.

Eger, President of the Pacific Association of Reform Rabbis added, “Federal law treats same-sex couples as strangers, thereby denying them the 1,138 federal rights, benefits and protections available to heterosexual married couples. This is not only an affront to the dignity of their families, but to those couples who want to pay their fair share. They continue to be penalized and discriminated by this unequal treatment”.

California Faith for Equality is a statewide network of clergy and lay leaders from a diversity of faith traditions who are committed to equality.
Posted by SUSAN RUSSELL at 10:20 AM

The irony is, a lot of straight, married folks complain that joint filing results in their taxes going up. Personally, I think they should since the rate of tax should be based on total household income, not on individual income.

Ii am perfectly willing to pay a tax penalty for my marriage. Indeed, we did pay such a penalty in CA, although if they cancel my marriage I want a refund.

Could this help solve the deficit? Let the gays marry!