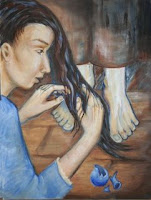 “No good deed goes unpunished” was something I grew up hearing my Aunt Gretchen say – usually with a frightening degree of relish in her voice and usually as she was launching into a long, gossipy story involving one of her Altar Guild or Daughters of the King cronies.

And so I guess I shouldn’t be surprised that “No good deed goes unpunished” comes to my mind as an appropriate sub-title of the gospel story appointed for this Monday in Holy Week – the story of the woman whose extravagant outpouring of precious perfume as a gift to Jesus earned her a tongue lashing from his disciples.

The good deed – the gift she offered – was judged and rejected by those surrounding Jesus who thought she should have made a different choice. In John's version it is Judas who protests. In Mark it says, “The disciples were infuriated with her.” Matthew says, “They murmured against her.” (And if I got to choose I think I’d pick the nice honest infuriation anytime over a bunch of murmuring going on!) Either way, her best offering was deemed unacceptable by the community that surrounded Jesus … there was no way they were going to let her good deed go unpunished.

And then Jesus intervened.

“Let her alone. Why do you criticize her?” he asked – and then challenged them to look beyond their “either/or” mind-sets and embrace what we like to call “both/and” thinking – that feeding the poor is always important but so is taking care of each other: that in doing what she did – offering what she offered – she gave not only a gift to Jesus but an example to us of risking to give abundantly, to love extravagantly.

What an example for us to claim on this Monday in this Holy Week. And what an antidote to the “either/or” challenges that seem to face us every time we turn around – not to mention the “no good deed unpunished” contingent who are all too ready to leap in at a moment’s notice with what we shoulda, coulda, oughta done instead …

The climate of polarization that currently grips both the American Culture and the Anglican Communion is a prime example. A friend and parishioner shared with me the recent experience of being part of a day of dialogue that brought together folks from different congregations and contexts for “conversation across the divide.” They started by going around the table and naming what were, for them, Jesus’ core moral values.

“Peace” said my friend. “Not at any price,” immediately retorted a woman across the table from her, “what about security?” – throwing down the “either/or” gauntlet … and letting her know it was going to be a long day across the divide!

The idea that we have to choose between peace and security is, I believe, a false dichotomy that puts us in “either/or” land – but it is a place where many people dwell: like the disciples either murmuring at or infuriated by those of us who have a different perspective.

Bridging that divide is tough – hard, hard work – but it’s work we’re called to do. And, I’m happy to report, its work my friend hung in there and gave it her best shot for the rest of the weekend. Were any minds changed? I suspect not – but – like the woman who anointed Jesus -- she did what she could.

In the wider Anglican Communion and here at home in the Episcopal Church the either/or du jour seems to be “justice or unity.” Can we find a way to respect the dignity of every human being and fully include all of the baptized in the Body of Christ and still maintain unity? And there are LOTS of good deeds not going unpunished as those working, striving, strategizing and advocating for a way forward through the hard ground of our differences run up against just how hard it is to hear the “both/and” voice over all the “either/or” shouting.

The prayer that began our worship is full of “both/ands” -- joy and pain/glory and crucifixion/the way of the cross and the way of life and peace. For the “way of the cross” is by its very nature a both/and – a way we walk throughout our spiritual journey and a way we walk in a most intentional way this Holy Week.

May we be given the grace in these holy days ahead to walk with the sure and certain knowledge that the One who walked this way ahead of us walks along with us as well. And may we be given the grace to treat each other gently along the way – letting the good deeds of others go unpunished as we work to proclaim together the Good News we have been given to share. Amen.
.
Posted by SUSAN RUSSELL at 9:49 AM