Today is "Slay a Dragon Day" 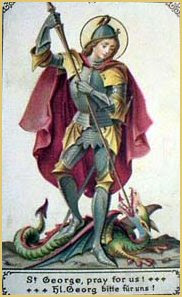 In Greek mythology, Perseus slew a monster that threatened Andromeda. Not to be outdone, the Crusaders from the 1300s told the story of Saint George. George used his magic sword to kill a dragon ... just in the nick of time to save the king’s daughter from being sacrificed to the fire-breathing beast. As the story goes, this dragon had an insatiable appetite and it was only through his deep faith that George was able to accomplish this deed.

Little factual information is known about Saint George other than his becoming a soldier and rising to a high rank under Diocletian. Because of his strong and open belief in Christianity, he was arrested, tortured and put to death at Nicomedia on this day in 303 A.D.

He was so revered by the Crusaders, that George was named Patron Saint of England in 1350 A.D. For many years, English soldiers wore the red cross of St. George on a white background as a badge; and it remains a part of the British Union flag.

The martyred hero is still honored throughout England on this day, Saint George Feast Day.
Posted by SUSAN RUSSELL at 1:07 PM