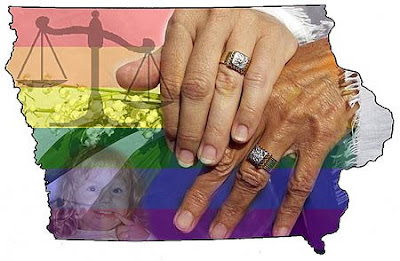 Wow! Breaking news came out of Iowa ... while I was attending a symposium on the architectural tension between differentiation and contextualization, focused on modernism in historic corridors. (They do NOT teach you this stuff in seminary!)

ANYWAY, my PDA was hyperventilating with the news that the Iowa Supreme Court unanimously declared marriage discrimination against same-sex couples unconstitutional.

You can read the whole decision here.
The Des Moines Register report is here.
Integrity has a press statement out over at Walking With Integrity.
The Lambda Legal press release is here.
And Politico.com posted this commentary:

It's really a sweeping, total win for the gay-rights side, rejecting any claim that objections to same-sex marriage can be seen as "rational," rejecting a parallel civil union remedy, and pronouncing same-sex marriages and gay and lesbian couples essentially normal.


So ... celebrate the good news and then let's get back to work making Iowa's example the rule of American liberty and justice for all and not an encouraging exception!

Iowa continues to be a leader in guaranteeing civil rights

This is a joint statement from Iowa Senate Majority Leader Mike Gronstal
and Iowa House Speaker Pat Murphy on today's Supreme Court decision:"Thanks to today's decision, Iowa continues to be a leader inguaranteeing all of our citizens' equal rights.

"The court has ruled today that when two Iowans promise to share theirlives together, state law will respect that commitment, regardless of whether the couple is gay or straight. "When all is said and done, we believe the only lasting question about today's events will be why it took us so long. It is a tough question to answer because treating everyone fairly is really a matter of Iowa common sense and Iowa common decency."

"Today, the Iowa Supreme Court has reaffirmed those Iowa values by ruling that gay and lesbian Iowans have all the same rights andresponsibilities of citizenship as any other Iowan."

"Iowa has always been a leader in the area of civil rights. In 1839, the Iowa Supreme Court rejected slavery in a decision thatfound that a slave named Ralph became free when he stepped on Iowa soil,26 years before the end of the Civil War decided the issue.

"In 1868, the Iowa Supreme Court ruled that racially segregated"separate but equal" schools had no place in Iowa, 85 years before theU.S. Supreme Court reached the same decision.

"In 1869, Iowa became the first state in the union to admit women to thepractice of law.

"In the case of recognizing loving relationships between two adults, the Iowa Supreme Court is once again taking a leadership position on civil rights.

"Today, we congratulate the thousands of Iowans who now can express their love for each other and have it recognized by our laws."

"Unanimously" - the most important thing about the opinion. As I understand it, IA's provisions for amending their constitution are more like MA's than CA's, so we don't have to worry about this opinion getting reversed by a well-funded Hate campaign, either.

AND, the Iowa House and Senate leaders issued a statement praising the opinion! Details here:

Really good discussion of the tight legal decision at LawDork.

Are you listening, California?

From the full decision, p. 19, the court (in part) bases the ruling on Article I, section 6 of the Iowa Constitution, which says:

All laws of a general nature shall have a uniform operation; the general assembly shall not grant to any citizen, or class of citizens, privileges or immunities, which, upon the same terms shall not equally belong to all citizens.

I might ask: what then, would be the basis for denying 10-year olds the right to marry, based on this article?

The court would probably answer with what it has on p. 20:

In deference to the
legislature, a statute will satisfy the requirements of the equal protection
clause
“so long as there is a plausible policy reason for the
classification, the legislative facts on which the classification is
apparently based rationally may have been considered to be true
by the governmental decisionmaker, and the relationship of the
classification to its goal is not so attenuated as to render the
distinction arbitrary or irrational.”

So the court, no doubt, would say there are 'plausible' policy reasons for denying 10 year olds the right to marry, but not same-sex couples.

It seems to me that when a court gets to decide what propositions in support of policy are plausible, that's legislation.

Folks, I'm sorry - because I'm fine with gay marriage becoming legal - but courts are supposed to decide facts of law, not policy. Look at some of the tesimony described on p. 10-11 - about how same sex parents make just as good parents as straight parents. This is what legislatures are supposed to do. As a matter of fact, the legislature did do it.

Sidney
is it not possible that the key word here is 'citizen'
in the majority of counties in the free world, the rights and responsibilities of citizenship are gained/assumed at the age of majority, so your ten year old isn't an issue, are they?

oh, and PS.
God bless the people of Iowa!