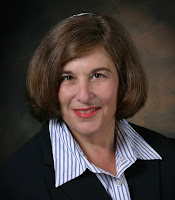 [Los Angeles] When Denise Eger assumes the leadership of this region’s local rabbinic association, she’ll be making history — twice over.

On May 11, Eger will become not only the first woman to lead the Board of Rabbis of Southern California — one of the nation’s largest rabbinic boards — but also the board’s first openly gay or lesbian president.

Eger, 49, serves as the rabbi of West Hollywood’s gay-and-lesbian-oriented Reform synagogue, Congregation Kol Ami, and has been active on the local board of rabbis for more than a decade. She also has been outspoken on issues of gay and lesbian rights in the Jewish community and beyond — most recently fighting against Proposition 8, California’s anti-gay marriage ballot initiative.

Eger’s ascension to the presidency is a milestone for the 72-year-old association, whose members include Reform, Conservative, Reconstructionist and Orthodox rabbis.
Read the rest here ... and MAZEL TOV, Denise!

Posted by SUSAN RUSSELL at 6:37 PM