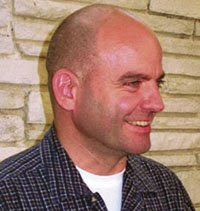 This announcement came yesterday, but I didn't want to miss the chance to join the "Woo Hoo Harry Knox!" chorus!

President Barack Obama announced the appointments of Bishop Charles E. Blake and Harry Knox on Monday, filling out a 25-person roster that is part of the White House Office of Faith-Based and Neighborhood Partnerships.

WASHINGTON – The Human Rights Campaign Foundation, the nation’s largest lesbian, gay, bisexual and transgender civil rights organization, announced today that HRC Foundation Religion and Faith Director Harry Knox will join the President’s Advisory Council on Faith-Based and Neighborhood Partnerships, an interfaith council of religious and secular leaders and scholars. The council will be comprised of 25 members, each appointed to serve a one-year term.

“I am humbled by the invitation to join President Obama’s Advisory Council on Faith-Based and Neighborhood Partnerships,” said Harry Knox, director of the Human Rights Campaign Foundation’s Religion and Faith Program. “I hope this council will draw upon the richness of our unique perspectives to advise the president on policies that will improve the lives of all the people we have been called to serve. The lesbian, gay, bisexual and transgender community is eager to help the Administration achieve its goals around economic recovery and fighting poverty; fatherhood and healthy families; inter-religious dialogue; care for the environment; and global poverty, health and development. And, of course, we will support the President in living up to his promise that government has no place in funding bigotry against any group of people.”

====
And from me:
Harry Knox is as strong, articulate and faithful a witness to the Gospel as they come—his addition to this panel is a HUGE step forward toward balancing the faith based voices represented in poliitical discourse advising the White House. And as a happily married man (married at All Saints Church in Pasadena, I might add!) he is also a great exemplar for ending marriage discrimination in this country.
.
Posted by SUSAN RUSSELL at 8:35 PM

Actually, I believe the White House would have done better to appoint you. They still can, in fact.