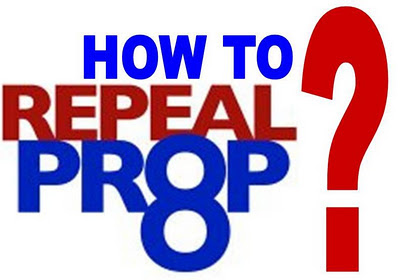 I wasn't going to take this one on but today is a "writing day" and I'm taking a lunch-break from working on Sunday's sermon to look at email and some of the blogs and I keep seeing "updates" on the push for a California initiative to overturn Prop 8.

EQCA (Equality California) came out against a 2012 ballot initiative.

Love Honor & Cherish came out in favor of one.

And I think it’s a terrible idea.

Not only because I hate the initiative system in general and I’m not convinced we can win in specific, but because in these economic times it is obscene to imagine trying to raise and then spend what it would take to launch a successful ballot initiative when kids don’t have health care and people are living in the streets. Not to even get into the fact that marriage equality in California does nothing to solve the 1138 federally protected rights that we wouldn't have anyway because of DOMA.

I’d rather spend time and money keeping the White House and electing a Congress that would support repealing DOMA.

As one colleague put it in an email, "Everything to lose. Nothing to gain." And that pretty much summed up where I am. Anybody have anything that would change my mind? I'm open. Sort of.
Posted by SUSAN RUSSELL at 12:47 PM

Maybe not in California but in other states the polling is different and there are people with money who would donate to a campaign to roll it back. There are something like 30 of these state constitutional amendments and every state is different.

One more thought to consider -- the various gay orgs have every right to oppose it, but its any citizens right to try to get it on the ballot and gather the signatures and if someone wants to take on that herculean task, by all means they have the right to do it.

My question is still "Convince me this is the best way for us to secure marriage equality."

The repeal of DOMA doesn't result in marriage equality. All it will do, I think, is permit the federal government to recognize marriage between same-sex couples in those few states that permit it.

That will have little effect in California for "marriage" although it will probably permit the federal recognition of California domestic partnerships, which in California have virtually the same legal rights as marriage. That's no small thing, of course. But that's not marriage equality.

For full marriage equality in California, you have to get rid of Prop. 8. There are really only two ways of doing that -- (1) have the U.S. Supreme Court declare Prop. 8 unconstitutional on equal protection grounds or (2) repeal Prop. 8 by way of an initiative (under California law, the legislature does not have the power to change any law enacted by an initiative).

So which is more likely?

Personally, I think it is very unlikely that there five votes on the Supreme Court to find Prop. 8 unconstitutional. Marriage for same-sex couples is a very hot-button issue and there's going to be great reluctance to impose it on this country by court order. Judges follow politics just as well as anyone else. I don't think they want another Roe v. Wade controversy.

Now, there's a possibility that the Ninth Circuit will find Prop. 8 unconstitutional on very narrow grounds that apply only to California (like a state, having granted the right of marriage to same-sex couples, can't take it away by popular vote or some such) and the Supreme Court will decide to leave that decision alone. But there are at least two, and maybe three, justices who would just love to issue a broad opinion declaring bans on marriage for same-sex couples constitutional and will vote to decide the case no matter how narrow the Ninth Circuit can craft its decision.

So that leaves repeal of Prop. 8 by an initiative. Personally, I hate initiatves, too, and I truly dislike putting people's personal rights up to a vote. But that's the law that we have to live with. And I think it's more likely that the California voters will eventually vote to repeal it, whether that's in 2012 or 2014.

I think it would be a waste of energy and money, especially given the probability the courts will finally intervene. If the appeals do not succeed, and if DOMA finally faces the Constitution in spite of Beohner, there is simply no need.

But, Susan your question is based on what is happening now (and by the way the court cases could be wrapped up before the election in November 2012). If the federal courts rule against marriage equality, then in fact, this is the ONLY way to achieve marriage equality so no need to debate best or not. This is all a game of strategy and gambling. If the Supreme Court rules against us in July of 2012 there may not be enough time to get in on the ballot in a few months. And, Obama might be popular again by then. I am just saying we may have to admit we miscalculated.

I'm with Primrose. As I said elsewhere, the same court that found corporations are people might easily find that our marriage is illegal.

Remember, before Lawrence v . Texas, there was Bowers v. Hardwick. The court is not a sure thing, not at all.

The message it would send, repealing Prop8 at the ballot box, would be enormous.

But it's not likely to happen. Instead, NC will likely get an amendement, and maybe MINN too.