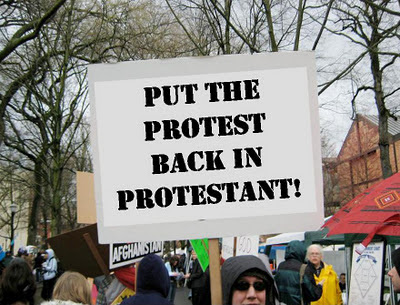 I loved, loved, loved, this blog from Facebook-Friend Diana Butler Bass. Gifted author, speaker and educator she hits it out of the park with this timely piece reminding (some of) us of the power of our Protestant roots.

You'll want to read it all here .. but here are some excerpts to get you started:

The heart of Protestantism is the courage to challenge injustice and to give voice to those who have no voice. Protestantism opened access for all people to experience God’s grace and God’s bounty, not only spiritually but actually ... Protestants were not content with the status quo. They felt a deep discomfort within. They knew things were not right. And they set out to change the world.

Protestants can rediscover the courageous part of their identity too long hidden under a veneer of cultural success ... by starting a church-based protest movement to challenge two things: bad government and cruel capitalism.

Good government reflects the principles of neighborliness, creates a sense of common benefit, serves and listens to all of its people.

Bad government serves only itself or an elite, cut off from any idea of a common good, and works to maintain its interests instead of an ethical vision for society.

Protestants would do well to protest against bad government, and not simply take sides in a false argument between small and big government. We need to protest for good government.

We need to protest for a different sort of capitalism—a nurturing capitalism—a capitalism that recognizes the diversity of environmental, spiritual, social, communal, and intellectual capital as part of a universal economy of human flourishing. Protestants need to be protesting cruel capitalism while envisioning and working toward a deeper, more embracing vision of nurturing capitalism.

So, Protestant friends: the world needs you. You are the heirs of those who once took to the streets to bring about God’s reign here on earth. You resisted oppression. You stood for justice. Do that again. Please.

The world needs protesters. Not just in Zuccoti Park. But we need to hear the howls of protests against bad government and cruel capitalism from the pulpits and pews of every mainline church in this nation.

We need to hear you proclaim God’s dream of good government and a nurturing economy for all.
Go for it. Make your ancestors proud.

[Thanks, Diana. And let the people say, AMEN!]
Posted by SUSAN RUSSELL at 2:34 PM

AMEN! I loved it too and shared it on my fb page!