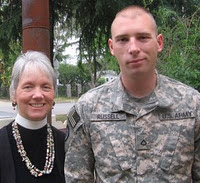 ... we went to war. In Afghanistan. And then in Iraq. And if you'd told me on October 7, 2001 that ten years later we'd still be at war and I'd be the mother of an Army veteran of both Iraq and Afghanistan deployments ... well, I'm not sure I'd have believed you. And yet here we are: us as a nation and me as a mom.

Ten years of war that's been fought without declaration and off the budget on what some have called "an imaginary credit card" -- destroying not only lives (American, Afghani and Iraqi) but economies . You can find a variety of numbers in different places but according to the Center for Defense Information, the estimated cost of the wars in Iraq and Afghanistan will reach $1.29 trillion by the end of fiscal year 2011. 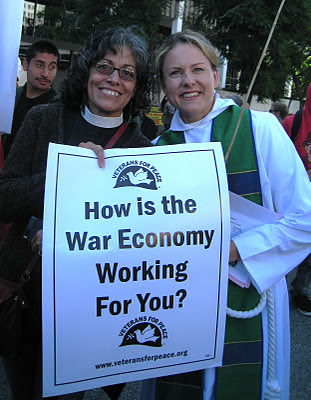 As the sign my friends Liz and Carissa carried in today's protest march in L.A. asked: How is the War Economy Working for You? Answer is: It Isn't. Working. For any of us.

And so we took to the streets today. A couple of hundred of us. Many "usual suspect" old peace and justice activists ... and a bunch of new, young, recently radicalized people from the "Occupy L.A." tent city.

"Jobs Not War" was the chant and -- as I told the reporter at La Placita Church before pre-march prayer service -- the reason I was there today (on my day off!) was not only because I'm a priest and pastor from a peace and justice church but because I'm a soldier's mom. 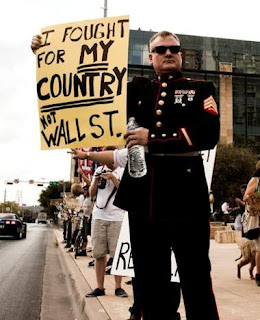 Because in 2005 I sat in the bleachers on a South Carolina army base at boot camp graduation and watched him and his earnest, shockingly-young colleagues pledge to "defend the Constitution against all enemies, foreign and domestic."

And because it turns out that corporate greed is arguably the greatest threat to the "liberty and justice for all" that my son and others like him have put their lives on the line to defend -- illustrated so well by this veteran at a protest rally today in Austin, Texas.

So enough already. Enough with the war. And enough with the greed. Let's become a country that says no to war and yes to jobs ... and let's not let it take ten more years.

Adding this to our story about the protest at Episcopal Café -- running around 10 or so after the ABC goes to Central Africa.

The Bishop of California turned out for San Francisco's ongoing vigil against the wars on the anniversary.