My rector in the Huffington Post on Coming Out Day

"Being Gay Is a Gift from God"
from the Huffington Post 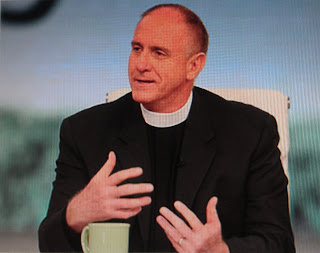 As a guest on The Oprah Winfrey Show in January 2009 I said “being gay is a gift from God.”

Those seven words – spoken to a call-in viewer from Atlanta -- set off a ripple of response that lit up Oprah’s switchboard, almost crashed our parish email server and continues to bring people toward us here at All Saints Church in Pasadena. And that moment continues to be for me an iconic example of how important it is for people of faith to confront discrimination against our LGBT brothers and sisters by standing up and by speaking out.

It is why that on this Coming Out Day 2011 I believe it is no longer enough for LGBT people to come out and let the world know who they were created to be – although that continues to be a courageous and transformational act. It is time for Christians to come out and let the world see the Church as it was created to be – a vehicle of love and justice, not a bastion of bigotry and homophobia.

It is time for people of faith to speak out against the religion-based bigotry that has for too long fueled the fires of homophobia that perpetuate violence against LGBT people and plants the seeds of self-loathing in LGBT youth.

And it is time to take to heart the words of Rabbi Abraham Heschel, who famously said, “Few are guilty, but all are responsible.” I may not be guilty of the religion based bigotry that has wounded countless members of God’s beloved LGBT children but I am responsible for offering a counter-narrative to the lies that have been told about the God I serve – the God of love, justice and compassion.

My faith tradition teaches that the truth will set you free – and the truth is: God Loves.

The truth is: Love Trumps.

And the truth is: Being gay is a gift from God.
Posted by SUSAN RUSSELL at 4:18 PM