Regas protests "war as the primary instrument of our national policy" 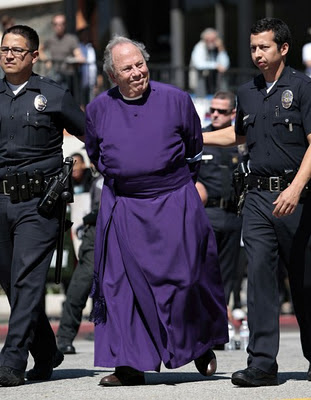 [As reported by Pat McCaughan in "The Episcopal News."]

Singing "we shall overcome," the Rev. Canon George Regas and more than a dozen other anti-war protestors were arrested Oct. 7 in front of the Federal Building in downtown Los Angeles after rallying against the war in Afghanistan.

Regas, rector emeritus of All Saints, Pasadena, and other clergy and faith leaders in vestments led the group, praying, chanting and singing, from La Placita past Los Angeles City Hall. He and others called for an end to the war and for the government to create jobs and to assist the poor.

Noting that the Afghanistan war is the longest running conflict in U.S. history, accounting for the deaths of more than 1,700 soldiers, Regas said: "War versus jobs is a concept that really resonates with the American public.

"We just want to hold up the concept that America must choose between a life of for all of its people, jobs for people, health care for people, taking care of the poor and the children as a priority -- that has a greater claim on us than the perpetuation of America as using war as the primary instrument of a national policy.

"America is waking up to the fact that the enormous war machine trying to have dominance across the globe is a very costly reality as the country struggles to take care of the children and the poor and the unemployed. We want to do everything we can to nurture that growing dream of a country that puts the life of its people and the health and wellbeing and education of all its people above the use of instrument of war to accomplish whatever it is that we're trying to accomplish with our militarism."
Posted by SUSAN RUSSELL at 10:28 AM