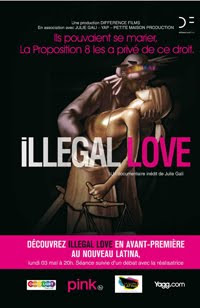 Louise and I met Julie Gali when she came to Los Angeles while working on her documentary "Illegal Love." From the IMDB summary:

In 2008 French filmmaker Julie Gali traveled to the US to film the election of Barack Obama. In spite of this victory for civil rights, it soon became apparent that the rights of another minority were under threat. In California the passing of Proposition 8 marked the only time in U.S. history that a civil right was actually taken away after it had been granted. Upon seeing this, Ms. Gali decided to immerse herself in the growing grassroots struggle of the gay community, which culminated in the October 11, 2009 March for Equality in Washington DC.

The film will have its U.S. Premiere on LOGO-TV Saturday night -- October 29th -- at 8pm. You'll see some familiar faces like Dan Choi, Gavin Newsom and Lady Gaga -- and All Saintsers Chad Allen and William Walker. More on the film here.

Tune in or "TIVO in" on Saturday night!

Posted by SUSAN RUSSELL at 8:50 PM