They're at it again 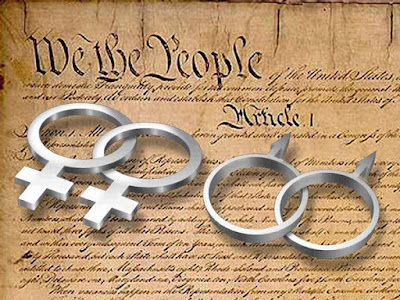 "They" are the so-called "American Family Association" -- and they've launched yet-another attack on LGBT Americans -- this time taking on the Pentagon's decision to allow military chaplains to perform same-sex marriages. Check it out (from an email received this morning:)

The Pentagon has decided that military chaplains will be allowed to perform same-sex unions on military installations. This is despite the 1996 Defense of Marriage Act which defines marriage for federal purposes as the union of one man and one woman.

This decision clearly violates the spirit of DOMA, since the result will be that federal employees and facilities funded by American taxpayers will be used to perform ceremonies that are prohibited from any kind legal recognition under federal law.

This is just more example of our military leaders caving in to the homosexual agenda. While conservative chaplains aren't being forced to perform same-sex marriages yet, it will only be a matter of time before they are tagged as "intolerant" for refusing to do so and forced to choose between their values and a career in the military.

According to the Constitution, Congress has authority to "make rules" for the military. TAKE ACTION. Urge your congressional delegation today to enact legislation prohibiting chaplains from performing same-sex weddings on military installations.

Seriously. That's what the "American Family Association" thinks Congress should be focused on. Enacting legislation to keep military chaplains from presiding at same-sex weddings. Because the biggest threat to the American Family are CLEARLY the hordes of same-sex military couples who will be beating down the doors of chaplains now that DADT is history.

Never mind our kids don't have healthcare, our schools are falling apart, unemployment is rampant, corporate greed continues to bleed our economy dry and we're about to mark the 10th anniversary of the War in Afghanistan -- yep ... small potatoes for the American Family Association. They're worried about making sure the soldiers who are putting their lives on the line to defend liberty and justice for all don't have the liberty to marry the love of their life or the justice of equal protection for their families.

Attempting to cast chaplains as victims for declining to celebrate same-sex weddings is the same red-herring B***S*** they drag out at every opportunity -- and completely ignores the fact that no Catholic chaplain has ever been compelled to marry a divorced couple against his conscience, no Orthodox rabbi has ever been compelled to preside at an interfaith wedding contrary to their faith and No. Clergy. Person. Ever. Has. To. Marry. Anybody.

So here's what we do with whatever the American Family Association tells us to do.

Call your Senator. Write your Representative. Tell them you support the Pentagon's decision allowing chaplains to preside at same-sex marriages. And while you have them tell them to help President Obama put DOMA where he said it belongs ... in the history books with DADT.

Will do... but unfortunately, my member of the House of Representatives is an ultra-conservative teapot head.

"Attempting to cast chaplains as victims for declining to celebrate same-sex weddings is the same red-herring B***S*** they drag out at every opportunity -- and completely ignores the fact that no Catholic chaplain has ever been compelled to marry a divorced couple against his conscience, no Orthodox rabbi has ever been compelled to preside at an interfaith wedding contrary to their faith and No. Clergy. Person. Ever. Has. To. Marry. Anybody."...meanwhile in South Carolina the Presiding Bishop attempts to depose Mark Lawrence for that very thing

Seriously, Hank???? Read the blog I just this minute posted about what a load of over-spun crap THAT assertion is. (And thanks for making my point. Owe ya, buddy!)

Now Mark, there's a thoughtful, mature comment given in love.....gee it had not occurred to me that i was a nazi- thanks for the insight...you guys are so nice and tactful over here...sorry that others have different views and the we're all children of God...i guess you folks would like to change that too...you wouldn't by chance be in ministry?