"I need your help to fight for equality, to pass a repeal of DOMA, to pass an inclusive employment non-discrimination bill"

So I was half-watching the Phillies trounce the Cardinals 11-6 in the first playoff game when a link to the U-Stream of President Obama's keynote at the HRC National Dinner popped up on my twitter feed. So of course I followed it ... and got to watch him live (evidenced by this off-my-laptop snapshot) ... 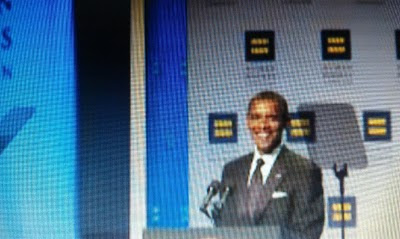 More here ... including these key quotes:

"I need your help to fight for equality, to pass a repeal of DOMA, to pass an inclusive employment non-discrimination bill, so that being gay is never again a fireable offensive in America."

I don't have to tell you, there are those who don't want to just stand in our way, but want to turn the clock back, who want to return to the days when gay people couldn't serve their country openly. Who reject the progress we've made. Who ... want to enshrine discrimination in state laws and constitutions -- efforts that we've got to work hard to oppose, because that's not what America should be about. We're not about restricting rights and restricting opportunity."


Or watch the whole speech here.
Posted by SUSAN RUSSELL at 6:00 PM

Yeah, he caught my attention too. It is a really good speech and a sharp rebuke of the silent Republicans.

I like Obama in "candidate mode" better than "presidential mode".