ON TODAY'S GAY AGENDA: Takin' It To The Streets

A Call to Action:

Stop the Wars! Fund Jobs!
October 7, 2011
Today is the 10th Anniversary of the beginning of the War in Afghanistan.

We will mark it here in L.A. with an interfaith peace rally at La Placita Church in downtown Los Angeles, followed by a march to the Federal Building. Here's the scoop from the ICUJP website:

Marking the 10th anniversary of the US invasion of Afghanistan, Interfaith Communities United for Justice and Peace (ICUJP) is leading a protest on Friday, Oct. 7 beginning at La Placita Church, 535 N. Main Street, followed by a march past City Hall and ending in a rally at the downtown Federal Building.

Join us if you're in the neighborhood. Film -- as they say -- at eleven. Meanwhile, here's a picture worth $3.6 billion a month (an estimated cost of the wars in Iraq and Afghanistan:) 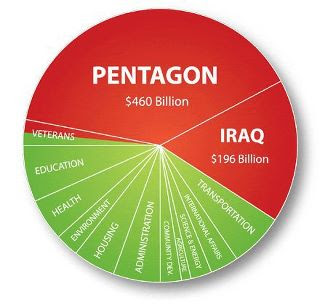 And here's how we support the troops:
We bring them freakin' home.
(Like my kid -- thanks be to God.)

Posted by SUSAN RUSSELL at 2:00 AM