Big News Out of DC: Leahy announces mark-up on Respect for Marriage Act 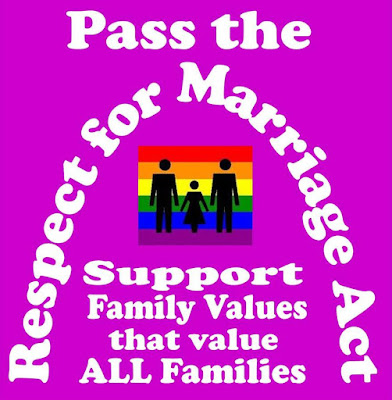 Big news out of DC today: Senator Patrick Leahy just announced that there will be a mark-up on the Respect for Marriage Act (H.R. 1116, S. 598), the bill that would repeal the so-called Defense of Marriage Act, next month. This is a huge step forward for ending federal marriage discrimination, and we applaud Senator Leahy for his leadership. Here's what the Senator had to say this morning as he made the announcement:

“The march for equality continues, and now is the time to ensure equality for gay and lesbian Americans who are lawfully married. Next month, I will call up the Respect for Marriage Act for debate and a vote in the Judiciary Committee. The Respect for Marriage Act would repeal the Defense of Marriage Act, which prevents thousands of American families from being protected by laws that help secure other American families. This is part of the nation’s continuing fight for civil rights for all Americans.”

Read the rest here.
To email Senator Leahy and thank him for his leadership click here.
Posted by SUSAN RUSSELL at 10:05 AM