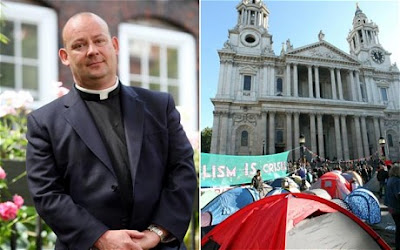 The Rev. Giles Fraser has resigned as canon chancellor of St. Paul's Cathedral in London. "It is with great regret and sadness that I have handed in my notice at St. Paul's Cathedral," Fraser said in a Twitter post on Oct. 27 after informing the cathedral dean and chapter of his decision.

His resignation wasn't a surprise. Giles had gone on record a few days earlier saying he would resign if the Occupy London Stock Exchange demonstrators are forced out by the Cathedral leadership.

From the report in The Guardian:

Fraser said he had quit because the cathedral had backed moves to clear the demonstrators, and that this might lead to "violence in the name of the church."

In an interview with the Guardian he explained how he had wanted to handle the issue of the camp: "I would want to have negotiated down the size of the camp and appeal to those there to help us keep the cathedral going, and if that mean that I was thereby granting them some legal right to stay then that is the position I would have had to wear"

And this one by BBC News:

"This is not a simple issue and I don't think anybody is trying to claim moral high ground on this at all," he said.

"And, if I can argue their side as well, the truth of the matter is there are all sorts of people who are being adversely affected by the camp and I would like the camp to move on too, because I think it does have an effect on small traders and ordinary people in the area.

"But what I'm not prepared to do is sanction the use of force in order to do that."

Here is some of the commentary on his principled stand for justice:

Peter Owen-Jones wrote in The Independent:

St Paul was by profession a tent-maker. He was also a Roman citizen, which gave him access to a certain degree of "diplomatic immunity" when he needed it. So it is a wonderful twist of fate that the London cathedral built in his name, whose grounds are now filled with tents, faces this dilemma: Is it part of the protected elite? Or is it with the tent-makers?

Giles Fraser, the Canon of St Paul's who announced his resignation yesterday, has made it clear where he stands. The question for the wider Church remains.

Over the past 50 years we have all felt the cold hands of capitalism squeezing more and more of our humanity out of us. We have all by and large allowed it to happen, believing it was progress. The Church of England has just gone along with it, and we are now utterly embedded in that system.

Under the banner of balance, we at some point took it upon ourselves to "steady the ship" even if it is – as now many of us feel intuitively – going in the wrong direction. As priests we are not supposed to uphold the needs of the State – we are here at best to provide balance against the excesses of power, both political and financial. But we have not remained true to our calling.

And from the Episcopal News Service report:

Diocese of London Bishop Richard Chartres said that he "heard, with regret," the news of Fraser's resignation. "His is an important voice in the church, and I have offered to meet him immediately to discuss how we can ensure it continues to be heard."

And we'll certainly all be watching to see how those discussions pan out.
Posted by SUSAN RUSSELL at 4:28 PM