Even MORE on marriage ... 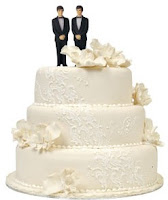 Now that Obama has a running mate and the Olympics are winding down (and oh yeah ... Lambeth is finally behind us!) am turning my attention back more and more to the marriage issue here in California and elsewhere.

We’ll Marry Each Other as Often as Needed wherein columnist Bob Morris describes his recent marriage to long-time partner Ira, concluding with these words:

For the moment, Ira and I are legal newlyweds. The other day he told me he loves being married.

“But if we hadn’t been able to get married, I’d still feel as married as I did before we got married,” he told me. “And if the laws change, we’ll just keep getting married wherever we have to until we’re absolutely married for good.”

Complicated? Perhaps. But then so is marriage, for better or worse, over and over again.


Also in today's NYTimes "Weddings and Celebrations"are signs that I'm not the only California Clergy Person with weddings galore:
.
Kenneth Lyle Shepard and Jack Lawrence Kouloheris were married on Thursday in a civil ceremony at San Francisco City Hall by Mary Ortega, a deputy marriage commissioner. Canon Mary E. Haddad, an Episcopal priest, led a blessing of the union on Saturday at Grace Cathedral in San Francisco. (Mary is a former clergy colleague here in Los Angeles ... )


Joshua David Wayser and Richard Dayton Schulte are to be married on Sunday by Rabbi Lisa Edwards in Malibu, Calif., at the home of Bill and Ellyn Lindsay, friends of the couple. Mr. Schulte and Mr. Wayser are adopting their fifth child, Isaac, who is 4 months old and will have a baby naming ceremony performed by Rabbi Edwards as part of the wedding festivities. “After you have so many children, you get embarrassed about inviting people to another baby naming,” Mr. Wayser said. (Mavel tov to the whole family ... and Lisa and I co-officiated at an interfaith blessing last year at Disney Hall and is a great friend and ally.)


And finally, here's a quote from my niece Jennifer ... whose wedding to her charming husband Travis I had the privilege of presiding at in April 2007: 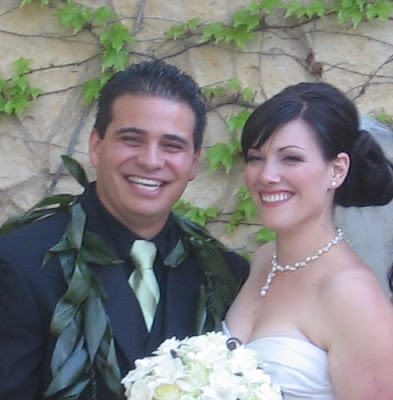 What's wrong with people who don't get that everybody has the right to be happy? How lame is that?

Dear Rev. Russell,
I grew up in the Episcopal Church, but I am no longer a member. I am one of the dreaded evangelicals that has moved over to "the right". Because somewhere along the way, I determined to believe what I said in church. When I said the creed, I had to believe it - that there was a virgin birth, and a Holy God, and a Christ who will return to judge. I grew tired of doing church with people who said it but didn't believe it.
On your blog, you wrote, "Traditional family values. Til death do us part. What part of "happily ever after" do they want to take away from Bob and Ira ..."
How about ever after death? I think that we can be so clever with our exegesis that we cut major sections out of Scripture, but this is one of those things that I don't think can be cut. By redefining sin, you can say that homosexuality is not addressed in our context or for our culture. But can you cut out the section that describes the eternal destiny of someone who chooses this?
I am not saying this in a hurtful or hateful way. I am just asking for you to understand of why I feel differently. I read my Bible and I see that it says that homosexuality is sin and that those who persist in a life of sin are damned. I have a close relative who is a lesbian. I care very much about her and about God, and I want them to get together, not just for her present happiness, but for her eternal happiness.
Your and other LGBT opinions are that my intolerance of a lifestyle that I believe the Bible calls sin makes me a hate-monger. I am not. I do not preach at my relative - I do not even tell her that she is wrong - I love her and, only if asked, share my beliefs. And I have biblical basis for those beliefs, not just an "I don't want you to have the fun that I have" attitude that this blog labeled me as having.