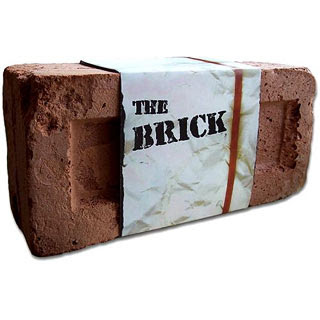 "We are threatened with a Com­munion based on fundamen­talist interpretations of scripture to please the Africans, and a hierarchical system of control to please the Roman Catholics. We want neither, for neither are Anglican."

Mad Priest has named the Reverend Jean Mayland "Brick of the Day" ... and well he should! Here's the Letter to the Editor of the Church Times she wrote and he's sharing on his blog, "Of Course I Could Be Wrong." And may I just say:
You Go, Girl!!!
Letter to The Church Times.
From the Revd Jean M. Mayland:
Sir, —
You have given considerable space to the Archbishop’s address summing up Lambeth, and to reflections by bishops. I hope you will be prepared to give some space to the view from the other side.
.
The Bishop of Winchester complains about well-funded lobby groups (News, 15 August). I had a part in three of the stalls in the Inclusive Church grouping — WATCH, Changing Attitude, and the Modern Churchperson’s Union. For six to seven hours a day, for weeks before the Conference, I sat at my computer, contacting volunteers, working out rotas, planning fringe events, and dealing with security issues. I am 72. I did so because I care about those on edge, and about open Anglican theology.
.
The groups had their centre not in luxury, but in a church hall rented for the purpose, where media work was carried out, meetings held, and evening meals cooked by volunteers. Other volunteers shared student houses.
People gave up holidays, and paid their own expenses. One set of volunteers worked late into the night to prepare the maligned Lambeth Witness; another got up early to try to distribute it in the face of every possible obstacle put in our path.
.
We presented fringe events — but hardly any bishops came. Few English bishops visited the Market­place. More overseas bishops did so, and were prepared to talk. As the heat and humidity in the Market­place rose, so the camaraderie increased, and gay people chatted with hard-line groups who wanted to “heal” them.
.
From our viewpoint, the bishops talked in secret little groups sur­rounded by a ring of police. They emerged only once to go to London to tell society how wicked it was not to do more about debt. Many of us had worked in or visited Africa and experienced the poverty. We do all we can to support the aid agen­cies, but we also know about violence against women there and the persecution of gay people. They are the real victims and scapegoats in this whole process.
Now we read the results of Lambeth with great depression. We are told the Communion held together (for the moment at least) but it is not going anywhere. There are no plans or processes to facilitate moving forward together but in different ways according to our culture and mission. There is the threat of a Covenant, which is a thoroughly un-Anglican concept, and a promise of a moratorium on gay blessings and consecrations, but no mention of a time limit.
We are threatened with a Com­munion based on fundamen­talist interpretations of scripture to please the Africans, and a hierarchical system of control to please the Roman Catholics. We want neither, for neither are Anglican.
Many people in our Church are ignorant of all this, and just go on in their own sweet way. Others are deeply disturbed. Just to mention two emails I have received — the first from someone with whom I used to work at CTBI: “I thought of you a lot during Lambeth. There was one Sunday morning that I listened to the Sunday programme, then just couldn’t go to the C of E church, bishop and all, for con­firma­tion. I feel more and more at home with the Quakers, but if I become a Quaker, I really don’t want it to be because I’m taking refuge from the Anglicans.”
Another wrote: “As a gay and partnered Anglican looking to a civil partnership and blessing next year, I am nearly exploding with frustration, as nothing seems to have moved forward. In fact I feel that things are more entrenched, if anything. I know you have been there, and are still journeying with women’s ministry issues: how do you do it and still remain faithful to a Church which does not seem to want to know?”
The answer lies in developing a spirituality for a long haul, and in getting practised at lifting oneself up from blow after blow.
At the beginning of the Confer­ence, Gene Robinson and some other American bishops — who had panted up the hill carrying their robes after a two-hour marathon in the cathedral — joined us in a euchar­ist in a field outside the city walls. Christ was there, as he was at Cal­vary, and in the garden of the resurrection. He will be with us through the darkness until we come to the joy of Easter morning.
JEAN M. MAYLAND
Barmston, East Yorks
Posted by SUSAN RUSSELL at 10:35 PM