Jim Naughton in THE CHURCH TIMES

What I ‘learnt’ at Lambeth 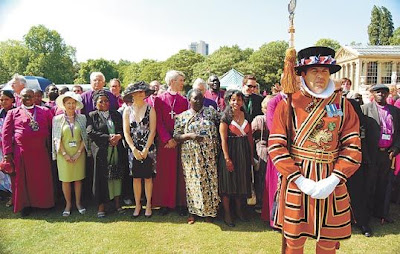 FOR AN American church flak like me, learning to work with the British news media has been similar to learning to drive on British roads. The enterprises are fundamentally similar, and yet one’s reflexes need reconditioning to avoid accidents.
As a former journalist, I was struck first by the difference in the ways that American and British journalists attribute (or don’t attribute) the information in their stories. The British press is freer in its use of anonymous sources than its American counterpart. One is constantly reading that a paper “has learnt” something. Well, how, exactly?

Perhaps this wink-and-nod approach makes a certain sense in the cosy world of the Anglican Communion, but it’s open to abuse. A friend of mine recently found her fondest hopes transformed into the hidden agenda of the Episcopal Church by a reporter who assumed that my friend had much more influence that she has.
Read the rest here ...
.
(And, for the record, my own experience with what Jim is talking about here was talking to a reporter at St. Mary's, Putney on a Sunday afternoon about the fact that I knew at least five or six gay or lesbian priests in the U.S. who not only could be but should be bishops ... only to read the next day that "the U.S. church has plans to consecrate 6 new gay bishops immediately after Lambeth Conference." Hmmm ....)
===
Photo note: That's the lovely Mary Bruno in the front row with the very "garden partyesque" white hat.
Posted by SUSAN RUSSELL at 9:12 AM

What? ONLY five or six? wink, wink

Yes, well had you read on- you would have been FURTHER astounded to see that these gay bishops are to lead a covert take-over of the dioceses of Pittsburgh, San Joaquin, South Carolina, Forth Worth, Central Florida...

I always wanted a purple dress. So if you have all that power, could you make me a bishop? Better yet could the English press consecrate me so I don't have to wait for the PBp to get here?