We lost another mother today

Del Martin, arguably one of the mothers of the lesbian rights movement died today in San Francisco at the age of 87. CNN reports that Phyllis Lyon, her partner of 55 years and wife of 72 days, was with her at the UCSF hospice. 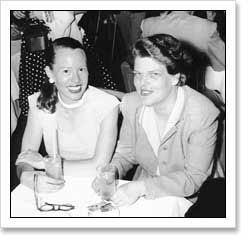 .... they founded "The Daughters of Bilitis" in 1955 -- a lesbian rights organization that "became a tool of education for lesbians, gay men, researchers, and mental health professionals." Del Martin was a leader in feminist and civil rights causes. She was the first out lesbian elected to the National Organization for Women (NOW). She was a founding members of the Alice B. Toklas Lesbian/Gay Democratic Club. She was also the founder of Old Lesbians Organizing for Change, fighting ageism and homophobia together. 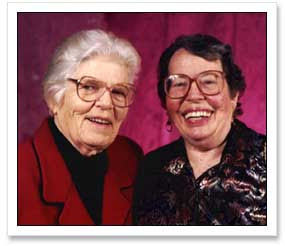 Del Martin and Phyllis Lyon became the first couple to legally marry in the United States on February 12, 2004 in San Francisco, California. They married again on June 16, 2008, when California became the second state to legally recognize same-sex marriage. 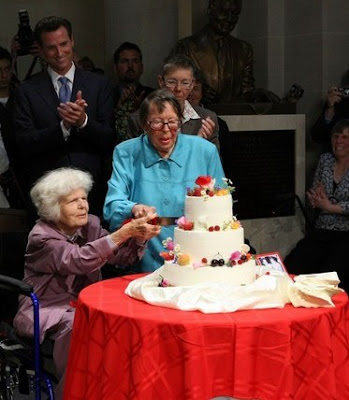 Upon her death, Phyllis said, “Ever since I met Del 55 years ago, I could never imagine a day would come when she wouldn’t be by my side. I am so lucky to have known her, loved her, and been her partner in all things. I also never imagined there would be a day that we would actually be able to get married. I am devastated, but I take some solace in knowing we were able to enjoy the ultimate rite of love and commitment before she passed.”

Rest eternal grant to her, O Lord, and may her soul and the souls of all the departed rest in peace and rise in glory.

Posted by SUSAN RUSSELL at 9:29 AM

May she rest in peace- it is sad though!

May the choir of angels sing for her, the hosts of heaven welcome her.

Well done, faithful and wise servant... may you rest in peace and thank you so much for being such a pioneer for the rest of us.

I can't help thinking of the first story in "If These Walls Could Talk 2". Two lesbian seniors are a couple in the early 1960s: closeted to the outside world, they share a house. Within days after the death of one partner (the homeowner), her nephew shows up, and tells his "aunt's longtime roommate" that she may take a small memento, and then she must LEAVE.

Rest in peace, Del, till Phyllis joins you to RISE in glory!

How terribly sad...but wonderful too, that she was able to marry her love in this life!

May she rest in peace and rise in glory. And may the Holy Spirit comfort Phyllis in her grief.