I surprised myself when I "did the math" and realized that today is both the 235th anniversary of the Declaration of Independence and the 15th anniversary of my Coming Out. That's right. I came out on the 4th of July. In the National Cathedral. And so I'm going to celebrate by re-running the blog I wrote to mark the occasion five years ago.

And then I'm going to go to the Dodger game and root for them (in spite of the McCourts) and eat a hot dog and watch some fireworks. HAPPY INDEPENDENCE DAY, EVERYBODY! 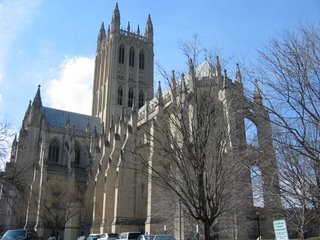 Ten years ago today at noon eastern time I was in the choir at the National Cathedral. While crowds of tourists milled about the nave of the cathedral and others gathered outside or headed toward the Mall for the fireworks festivities scheduled later it the day or lined up to see the opening-that-day film “Independence Day” (remember that one?) a remnant of us gathered in the cathedral choir for a festival celebration of the Feast of American Independence, BCP style.

That’s my coming out story. I’ve told it many times before but on this actual, honest-to-God 10th anniversary it seemed worth telling again. It seemed worth reminding myself – and anybody else who wants to listen in – that I did not come out from the fringes of anything – I came out from what one might call “the diverse center.”

It had to do with recognizing that I could not be fully present at altar if I was not fully present in myself – and it had to do with being raised in a church where +John Hines taught me that “justice is the corporate face of God’s love,” +Ed Browning told me that in the Episcopal Church there would be no outcasts and the consecration of +Barbara Harris incarnated for me the hope that this church was actually willing to live into its high calling to live out a radically inclusive gospel.

So Happy Anniversary to me – and to the scores of LGBT Episcopalians like me. We are not a fringe issue – we are part of this church – part of that diverse center Presiding Bishop Griswold called us in Columbus to listen to.

Are we a challenge to the wider church? I hope so. And I hope we continue to be. I hope that our voices of faith and witness will continue to preach, to protest and to prophesy – that we will stand in the temple and tell the Good News of God in Christ Jesus made present in our lives, our vocations and our relationships. That we will preach that Good News in and out of season and that we will challenge this recent lapse in moral leadership by the 75th General Convention of the Episcopal Church for what it is: a failure of this church we love to live up to all we know she can be.

So here's to Anniversaries and to Independence Day -- to everyone celebrating with BBQ, beer and fireworks our core American values of liberty and justice for all and everyone committed to our core Episcopal values of respecting the dignity of every human being. Not because we’re politically correct but because we’re gospel obedient. And here's to the diverse center -- long may it wave and long may it MAKE waves as it continues to live into the promise it inherits from Hines and Browning and Harris; from Washington and Jefferson and Madison.

Lord God Almighty, in whose Name the founders of this country won liberty for themselves for us, and lit the torch of freedom for nations then unborn; Grant that we and all the people of this land may have grace to maintain our liberties in righteousness and peace; through Jesus Christ our Lord, who lives and reigns with you and the Holy Spirit, one God, for ever and ever. Amen
Posted by SUSAN RUSSELL at 6:00 AM

Your story resonated very deeply with me.

Because of severe abuse in my childhood, I was lost to myself and did not realize that I am gay until I was 47 and suddenly found myself in love with the "wrong person".

I came out in a blinding streak of light and was completely accepted and encouraged by my church, my job, my friends, and all my family but one. He changed his mind 6 months later and all was well.

For the past 35 years, I have had a call to priesthood which I never felt able to answer because of the PTSD I suffered and because I did not feel that I was that spiritual. How could I possibly be a priest if I didn't "feel" it.

After I came out, the PTSD symptoms dramatically reduced. I also found that worship made more sense and my connection to God strengthened. My spirituality blossomed. I realized that I had been blocked from worshipping as my whole self because my whole self had not been present.

Unfortunately, I will not be able to answer the call. I worked for ten years for the diocese. When I was poisoned on the job and requested safe working conditions, the pointy hat treated me like a pariah and I was fired. When I called him on his behaviour, he blew me off. I cannot swear obedience to this man.

The pointy hat has also had less than honourable dealings with some of our friends as well. The idea that our tithes are supporting this man really sticks in the craw.

At this point, we find ourselves hanging in there, hoping for change to come, but we are tithing to charities that do similar good work as the church, but that do not oppress us. Participating in our own oppression has to be the craziest thing we have ever done.