Three Cheers for Proper 11A!!

Well, first it starts out with a great Collect of the Day:

Almighty God, the fountain of all wisdom, you know our necessities before we ask and our ignorance in asking: Have compassion on our weakness, and mercifully give us those things which for our unworthiness we dare not, and for our blindness we cannot ask; through the worthiness of your Son Jesus Christ our Lord, who lives and reigns with you and the Holy Spirit, one God, now and for ever. Amen.

We start out praying to the God who already knows everything we need and isn't surprised when we don't even know what to ask for ... well, it kind of puts things like dogmas and doctrines and litmus tests in perspective, doesn't it? I mean really. 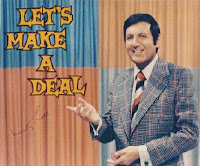 I remember a sermon I preached -- oh, lots of years ago now. It was about the danger of confusing God with Monty Hall and life with an episode of "Let's Make a Deal." It was about folks who live their whole lives in fear that they're going to guess wrong ... pick wrong ... BELIEVE wrong ... and on the "last day" end up in the Lake of Fire behind the curtain instead of getting the keys to the kingdom in the box. I didn't think that's how God works then and I don't think that's how God works now ... but if I ever need a reminder then the Collect of the Day for Proper 11 is a GREAT reminder.

We've got Jacob and ladder, Psalm 139 (one of my all time favs "Thou hast searched me out and known me ...")And then there's this great reading from Matthew ... sort of Part Two of the "Sower and Seed" parable we heard last week:

Jesus put before the crowd another parable: "The kingdom of heaven may be compared to someone who sowed good seed in his field; but while everybody was asleep, an enemy came and sowed weeds among the wheat, and then went away. So when the plants came up and bore grain, then the weeds appeared as well. And the slaves of the householder came and said to him, `Master, did you not sow good seed in your field? Where, then, did these weeds come from?' He answered, `An enemy has done this.' The slaves said to him, `Then do you want us to go and gather them?' But he replied, `No; for in gathering the weeds you would uproot the wheat along with them. Let both of them grow together until the harvest; and at harvest time I will tell the reapers, Collect the weeds first and bind them in bundles to be burned, but gather the wheat into my barn.'"

Then he left the crowds and went into the house. And his disciples approached him, saying, "Explain to us the parable of the weeds of the field." He answered, "The one who sows the good seed is the Son of Man; the field is the world, and the good seed are the children of the kingdom; the weeds are the children of the evil one, and the enemy who sowed them is the devil; the harvest is the end of the age, and the reapers are angels. Just as the weeds are collected and burned up with fire, so will it be at the end of the age. The Son of Man will send his angels, and they will collect out of his kingdom all causes of sin and all evildoers, and they will throw them into the furnace of fire, where there will be weeping and gnashing of teeth. Then the righteous will shine like the sun in the kingdom of their Father. Let anyone with ears listen!"

What I love about this story is the good news that it's God's job to figure out the wheat from the weeds -- not ours.

What I ALSO love about this story is how much the disciples don't get it and need to have it explained to them.

And what I REALLY love about this story is that the church seems to have spent the last 2000+ years continuing "not to get it" ... not having "ears to listen." Instead it has too often set itself up as the the judge of who's in and who's out of God's kindgom ... of who's the wheat and who's the weed in God's garden.

So Cheers for Proper 11A. For those with ears to hear and those who are still trying to figure it out. And especially for those preaching this Sunday! ENJOY!!
Posted by SUSAN RUSSELL at 5:30 PM

fear that they're going to guess wrong ... pick wrong ... BELIEVE wrong ... and on the "last day" end up in the Lake of Fire behind the curtain instead of getting the keys to the kingdom in the box.

I swear, some so-called Christians treat "Jee' Zus" as a magic incantation [As opposed to faulty incantations like "Awl' Uh" or "Buu' Dah" or "Krihsh' Nah"]. Nothing to do w/ Gospel VALUES (justice for the poor&outcast, non-violence, "7x70" forgiveness). Just ecstatically (or judgmentally) pronounce the "Jee' Zus" incantation (cuz that's the Right Box O_o).

and the fire has multiple levels of meaning ... it takes that which was negative and burns it for needed fuel for the community, as well as, can be related to the refiners fire -- those who have the stains burned out of them and are purified ...

That God is wisdom, and he knows our needs, and he has compassion on us, that he lives and reigns for ever & ever, is his.... dogma/doctrine.

If you live in fear that you have 'picked' wrong... then you have your answer already.

No Christian fears that they have picked wrong, as their hope is assured.