Every Touchdown Begins With A Kickoff 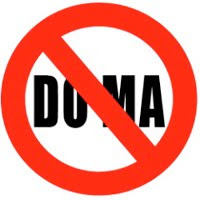 So tomorrow is the day. At 9:45 a.m. EDT the Senate Judiciary Committee will convene the first-ever challenge to the "so-called" Defense of Marriage Act (DOMA) in a hearing described thus:

NOTICE OF COMMITTEE HEARING: “S.598, The Respect for Marriage Act: Assessing the Impact of DOMA on American Families”

If you want to watch the hearing online here's the link

You can also watch Jay Carney "break the news" that President Obama will support the Respect for Marriage Act with this statement at the White House press briefing today ...

“I can tell you that the president has long called for legislative repeal of the so-called Defense of Marriage Act, which continues to have a real impact on the lives of real people families, friends and neighbors,” Carney said. “He is proud to support the Respect for Marriage Act introduced by Sen. Feinstein and Congressman Nadler, which would take DOMA off the books once and for all. This legislation would uphold the principle that the federal government should not deny gay and lesbian the same rights and legal protections as straight couples.”


So here's what I think. Every touchdown starts with a kickoff. No matter how far the end zone might look at the snap, the ball is now in play. And that, my brothers and sisters, is something to rejoice and be glad in!

Almighty God, you proclaim your truth in every age by many voices: Direct, in our time, we pray, those who speak where many listen and write what many read; that they may do their part in making the heart of this people wise, its mind sound, and its will righteous. Amen.

May God protect and inspire those who speak for our families and call our nation to live up to its high calling to be a nation of liberty and justice for all.