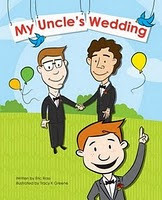 The good news this morning that Governor Jerry Brown signed the FAIR Education Act into law leads me to this question: Since we’re going to teach about gays and lesbians in our schools anyway, can we have marriage equality back in California now, please?

I mean seriously. During the massively funded 2008 Prop 8 battle here in California one of the most frequent lies told by the folks supposedly protecting traditional biblical values was that marriage equality would lead to “teaching about homosexuality in our schools.”

Two big problems with that approach: the first being that lying is NOT a traditional biblical value. (I’ve checked.) The second is that the May 2008 California Supreme Court decision on marriage equality had nothing whatsoever to do with what our children are taught in school and everything to do with ending discrimination against families with same-sex parents.

The irony is that today’s landmark legislation now takes away from Prop 8 supporters what exit polls told us was their most successful campaign misrepresentation. So now that Judge Walker has ruled Prop 8 unconstitutional and the legislature has mandated fair, accurate, inclusive and respectful representation of LGBT people in history in our scholls, can we just finish the job and have marriage equality back? Please?
Posted by SUSAN RUSSELL at 4:36 PM

Why this is important: do you remember the case in 2009 where a child was told she couldn't do a report on Harvey Milk without her classmates getting permission slips for "sex education"??

My comments on FAIR and Harvey Milk and Prop8 here