Response from my congressman to my email on the budget impasse

So like everybody else (I HOPE!) I wrote my representatives ... congressional and senators ... called their offices (local and DC) ... and let them know what I think about the Debt Ceiling Debacle. Here's the reply I got just a few minutes ago from my congressional rep ... Adam Schiff (who I got to call on when I was on Capitol Hill in May for the HRC clergy lobby day.)I've added the "bold" below. 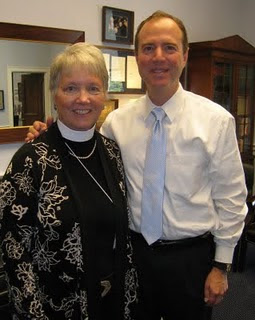 Thank you for contacting me with your thoughts on the debt ceiling issue. I appreciate hearing from you and welcome your input.

As you know, over the last several months, Washington has been engaged in a painful debate over raising the federal debt limit. The discussion has thrust some of the most challenging fiscal issues facing the nation into the limelight, garnering a great deal of attention in the process - and rightfully so. I fully agree that it's important that we craft serious solutions for our nation's looming deficit and debt problems, which pose a threat to our long-term economic future.

The United States Constitution gives Congress the sole power to borrow money on the credit of the United States. To assist in efforts to control the country's finances, Congress created a statutory debt limit that compels Congress and the President to take deliberate action to allow further federal borrowing. The Treasury has never before faced a situation in which it was unable to pay its obligations as a result of reaching the debt limit - the debt limit has always been raised by Congress before the debt reached its ceiling.

If a default ever were to occur, it would have catastrophic effects from Wall Street to Main Street. Both directly and indirectly, many corners of the U.S. economy rely on the nation's creditworthiness, and if a default occurs, everyone will suffer. Like a homeowner who can't afford to pay a mortgage, or a consumer who misses payments on their credit card, the nation would face higher interest rates after a default, increasing the deficit. Default will also mean higher interest rates on new mortgages, tighter credit for individuals and companies, dwindling retirement funds, and slowed economic growth. After suffering through the worst recession since the Great Depression, we cannot afford to take these prospects lightly - we cannot afford to default. This would be the ultimate self-inflicted injury.

I've long advocated for commonsense solutions to the nation's growing budget problems, and as a member of the Committee on Appropriations, I have worked on implementing reasonable solutions to reduce our deficit that make cuts that will not impair our recovery or land disproportionately on the poor, that protect Social Security, Medicare and Medicaid, and that raise revenues by eliminating special interest corporate loopholes. I also favor allowing the upper-income tax cuts of the Bush Administration to expire, as it is appropriate to ask those who have prospered most over the last decade to contribute a fair share.

Unfortunately, we are currently at an impasse in the debt ceiling negotiations as a result of the unyielding insistence by some members of the House Majority that we must reduce our deficit through massive and immediate spending cuts alone: an extreme position that I cannot support.

The budget plans recently offered by the House Majority would continue an unsustainable policy of upper-income tax cuts, while turning Medicare into a voucher program. These proposals are not new and do not meet a test of basic fairness. Instead, they reflect a policy that was evident in the debate over the continuing resolution to fund the government, where the majority protected multibillion dollar tax subsidies of the oil industry while cutting home heating oil assistance to the poor.

There are a few proposals under discussion that would put our nation's fiscal house back in order, reduce the deficit by trillions of dollars, and maintain the solvency of Medicare and Social Security, while avoiding the kind of immediate, devastating cuts that would risk sending our economy back into recession. I recognize the need for compromise to resolve the issue, and the need to act as soon as possible. But I cannot support a deal that will balance the budget on the backs of our seniors or the poor and most vulnerable -- while asking nothing of millionaires and billionaires. Such a proposal does not represent the values of the American people, who have made it clear they support a balanced solution that makes cuts and raises revenues requiring a shared sacrifice.

I appreciate your frustration with the continued bitter and rancorous rhetoric emanating from Washington -- and believe me, I share it. I'm also committed to doing everything I can to resolve this issue immediately and fairly, so we can avoid the terrible consequences of default.

Again, I thank you for weighing in with your concerns, and urge you to continue to express your support for a reasonable solution to this man-made crisis. Please be assured that I will keep your views in mind when this issue is considered on the House Floor.

An on-going job of a Representative in Congress is to help constituents solve problems with federal agencies, access services, and get their questions answered promptly. On my website, I offer a detailed guide to the services my office can provide to you as a constituent. I also encourage you to subscribe to the Washington Update, my email newsletter which contains information on local events, my work in Washington, and even lets you weigh in on important issues through online polls. Visit me online at http://schiff.house.gov to subscribe. Please know that you can always reach me at (626) 304-2727 or via my website if I can ever be of additional assistance.

Thank you again for your thoughts. I hope you will continue to share your views and ideas with me.


Sincerely,
Adam B. Schiff
Member of Congress
Posted by SUSAN RUSSELL at 12:46 PM

I called my (Republican) Rep on Monday. The aide who answered started ranting at me (after I said "Raise the Debt Ceiling NOW, Period.") and kept interrupting me, so I hung up.