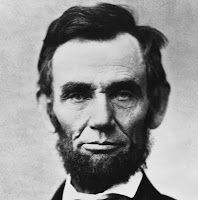 From DOMA hearing this a.m. -- Sen. Dick Durbin (D-Ill.) acknowledged that he'd voted for DOMA in 1996, but said he had been wrong -- and then quoted someone he referred to as "another senator from Illinois" -- Abraham Lincoln -- as explaining his change of position on an issue by saying, "I'd rather be right some of the time than wrong all of the time."

That's from a great feature on the hearing I just finished reading in this piece from The Atlantic -- a feature that included this summary ...

The "Respect for Marriage Act", or the DOMA repeal bill, would let the feds return to their traditional practice of recognizing any state's valid marriages -- which would include same-sex marriages made in the six states (and district of Columbia) that currently perform them.

What a difference 15 years makes. According to testimony in today's hearings, approximately 80,000 same-sex couples have married under their states' laws -- and (I can say this from experience) neighbors, coworkers, and family members are asking the unmarried ones when to expect the wedding. Even in states where no such marriages have been performed, every household knows of someone married to another person of the same sex -- if only Ellen DeGeneres, daytime television's new presumed queen, who delights in talking about her wife Portia deRossi.

Just as important, by now almost all the other major antigay scaffolding extant in 1996 has been dismantled. In 2003's Lawrence v. Texas, the U.S. Supreme Court slapped down its earlier Bowers v. Hardwick decision, declaring it "was not correct when it was decided, and it is not correct today."

Last year, Congress passed a repeal of "Don't Ask Don't Tell," which the military is steadily inching toward enacting. Mary Bonauto of GLAD (Gay & Lesbian Advocates & Defenders), one of the chief LGBT legal strategists, won the first crucial anti-DOMA round in her Massachusetts lawsuit, in which married couples are suing for federal recognition. Celebrity attorneys David Boies and Ted Olson won another round in their federal lawsuit against Proposition 8, in which voters put an end to same-sex marriages in that state. Obama's Justice Department refused this year to defend DOMA in court, calling it unconstitutional.

Former congressman Bob Barr, DOMA's prime mover, and Bill Clinton, its presidential signer, have both called for DOMA's repeal. And most important, in four major national opinion polls this year, for the first time, a majority of Americans (53 percent or more, depending on the poll) say they support same-sex marriages -- a number that will continue to increase steadily, as even Republicans under 45 overwhelmingly support marriage between two women or two men. Not surprisingly, President Obama has steadily supported DOMA repeal, and yesterday explicitly offered support to the Respect for Marriage Act, suggesting that he thinks it no threat to his reelection.

There's more ... including some great quotes and this conclusion:

And while states' laws and constitutional amendments have to be repealed as well, the federal DOMA is the most important brick in the wall. Today I could see that wall shaking.