The Gospel According to Winston Churchill 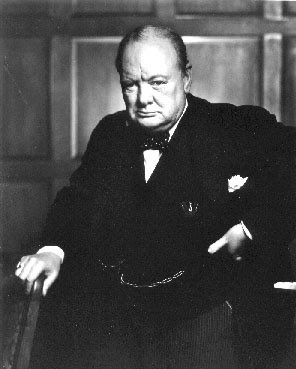 "Americans can always be counted on to do the right thing ... after they have exhausted all other possibilities." - Winston Churchill

It's a quote I had never heard before but it caught my attention in an NPR report I was listening to when I was out grabbing a late lunch. And now, just as I was cleaning off my desk to leave for the day, I got a new update from the L.A. Times that included some encouraging news on the budget stalemate:

House Republicans brace for compromise on debt
GOP leaders turn to their most trusted budget expert, Rep. Paul D. Ryan (R-Wis.), to explain to the rank and file what could happen if Congress fails to raise the debt ceiling.

Reporting from Washington— Republican leaders in the House have begun to prepare their troops for politically painful votes to raise the nation's debt limit, offering warnings and concessions to move the hard-line majority toward a compromise that would avert a federal default.

For weeks, GOP conservatives, particularly in the House, have issued demands about what they would require in exchange for their votes to increase the debt limit. In negotiations with the White House, Republican leaders have found those demands were unattainable. Unwilling to risk the economic and political consequences of a federal default, which could come as early as Aug. 2, they have started the difficult process of standing down.

At a closed-door meeting Friday morning, GOP leaders turned to their most trusted budget expert, Rep. Paul D. Ryan of Wisconsin, to explain to rank-and-file members what many others have come to understand: A fiscal meltdown could occur if Congress fails to raise the debt ceiling.

House Speaker John A. Boehner of Ohio underscored the point to dispel the notion that failure to allow more borrowing is an option. "He said if we pass Aug. 2, it would be like 'Star Wars,'" said Rep. Scott DesJarlais, a freshman from Tennessee. "I don't think the people who are railing against raising the debt ceiling fully understand that."

Well, maybe they do now. Maybe after all the posturing and polarizing and partisanizing they've finally exhausted all their other possibilities and will now suck it up do the right thing and find a compromise and get to work to making this country work rather than working to make their opponents look bad.

You can read the rest here. And then continue to pray without ceasing ... as our prayers of the people will say here on Sunday "…for maturity and courage for our leaders in Washington and for a circle of protection around those most in need as decisions are made regarding our nation’s budget."

As for me, I'll be finishing up cleaning up my desk and heading home with the Gospel of Winston Churchill still ringing in my ears.