Another step forward on Liberty & Justice for ALL

It's Independence Day Weekend ... and how helpful of the 4th of July to be on a Monday this year! That gives us a nice long four-day weekend to celebrate the noble and still-in-progress experiment of being a nation conceived in liberty and dedicated to the proposition that all are created equal. Equal AND "endowed by their Creator with certainly unalienable Rights" including "Life, Liberty and the pursuit of Happiness." 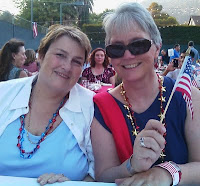 We started the weekend with friends, food and fireworks last night here in Altadena. (Thanks, Greg!) Today is get some chores done around the house and then dinner with BFFs from Santa Monica. Tomorrow is one of my favorite Sundays of the year ... where at All Saints Church we will celebrate with the propers for Independence Day, patriotic hymns and (this year) a sermon from our Rabbi-in-Residence Leonard Beerman -- all reminding us of both the privilege and the responsibility of being part of this great American Experiment. And I'll be preaching at our 1pm bi-lingual service ... a sermon entitled "Liberty and Justice for All." Finally, on Monday we'll see if we can station ourselves to get a look at the Rose Bowl fireworks down the Arroyo -- after a hotdog and some of Louise's famous macaroni salad. (Another glimpse into "scary lesbian lifestyle land.")

Meanwhile, what a delight to see this report filed last night about another step forward toward the liberty and justice for all goal: The Department of Justice putting some significant teeth into challenging the constitutionality of DOMA (the so-called "Defense of Marriage Act" that is actually a Discrimination Against Some Marriages Act.") Take a look:

Today, the Department of Justice filed a brief in federal court employee Karen Golinski's federal court challenge, supporting her lawsuit seeking access to equal health benefits for her wife and arguing strongly that the Defense of Marriage Act is unconstitutional in terms unparalleled in previous administration statements.

In a brief filed on behalf of the Office of Personnel Management and other federal defendants, DOJ acknowledged the U.S. government's "significant and regrettable role" in discrimination in America against gays and lesbians. The summary of the DOJ argument that Golinski's case should not be dismissed begins simply: "Section 3 of the Defense of Marriage Act, 1 U.S.C. Section 7 ('DOMA'), unconstitutionally discriminates."

... Unlike in other cases where DOJ has stopped defending DOMA in accordance with President Obama and Attorney General Eric Holder's decision that Section 3 of DOMA -- the federal definition of marriage -- is unconstitutional, DOJ lawyers today made an expansive case in a 31-page filing that DOMA is unconstitutional. Previously, the government had attached the Feb. 23 letter from Holder to House Speaker John Boehner (R) that announced the DOJ position to filings to courts about the decision to stop defending the law, but it had not laid out any more expansive reasoning.

... [the] filing does more than acknowledge the federal government's role in discrimination, going on to detail specific instances of anti-gay and anti-lesbian discrimination, including the 1950 Senate resolution seeking an "investigation" into "homosexuals and other sexual perverts" in government employment and President Dwight Eisenhower's executive order adding "sexual perversion" as a ground for "possible dismissal from government service," in the brief's words. It also details the role of the Federal Bureau of Investigation and the U.S. Postal Service in investigations seeking information about government employees suspected of such "perversion."

The brief goes on to describe anti-gay and anti-lesbian state and local discrimination, as well as private discrimination, before discussing other considerations made by courts when deciding what level of scrutiny should be applied to laws classifying groups -- including immutability; political powerlessness; and whether the classification bears any relation to, as the brief puts it, "legitimate policy objectives or ability to perform or contribute to society."

You can read the whole report from Metroweekly's Chris Geidner here -- and I hope you will. And bookmark this as "one to watch" as we continue to move forward toward making the goal of liberty and justice we celebrate this weekend with our friends, our food and our fireworks not just a pledge we make to our flag but a reality we live in our nation.
Posted by SUSAN RUSSELL at 10:53 AM