And here's to you, Bishop Robinson!

This is me ... blogging from 33,000 feet. Who knew American Airlines had Wifi? And how thrilled am I to not have to wait til we land in Ft. Worth to share this GREAT Letter-to-the-Editor in today's USA Today ... which I picked up at the airport and have now found online. Check it out here ... and here: 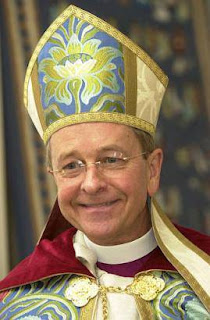 Commentary writer Daniel Blomberg, in the piece "If gays serve openly, will chaplains suffer? Yes. Religious liberty is in real jeopardy," raises needless fears based on a flawed understanding of the policies that govern the military chaplaincy (On Religion, The Forum, July 12). These policies are designed to preserve and protect the free exercise of religion in the military and would remain in effect after the repeal of "don't ask, don't tell" (DADT).

No Roman Catholic, fundamentalist Christian or Orthodox Jewish chaplain would have to change her or his beliefs about homosexuality. If any gay or lesbian servicemembers went to one of these chaplains, they would still receive the counseling against homosexuality they have always received. What they wouldn't receive is a discharge from their military service for being gay and speaking about it.

Presumably, these same chaplains have counseled soldiers against getting an abortion, even though it is perfectly legal to do so. Speaking against homosexuality is what gay and lesbian soldiers have come to expect from these brands of religious leaders. Within each chaplain's congregation, he or she will continue to be free to preach according to the tenets of his or her own faith. That will not change.

The separation of church and state is safe under DADT. What is not safe is the employment of our gay and lesbian service men and women who are simply seeking the right to enjoy the "life, liberty and the pursuit of happiness" that they are willing to risk their lives defending.

Blomberg laments the "subtle pressure to keep their opposition silent" that chaplains against change would endure, but what about the less-than-subtle pressure long endured by those chaplains who oppose the DADT policy?

If chaplains can operate effectively in a war zone, surely they can withstand some subtle pressure to accept all soldiers as the children of God they were created to be.

The writer is the IX Bishop of New Hampshire and the first openly gay priest elected bishop in the worldwide Anglican Communion.

And let the people say a BIG old AMEN!