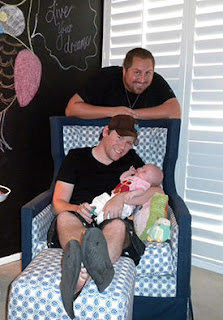 Scout Masterson and Bill Horn spent much of the past week waiting to hear if they were any closer to being as equal as the rest of us.

They got their answer Monday when a three-judge panel of the 9th US Circuit Court of Appeals halted same-sex marriages at least until December, dashing the hopes of gay and lesbian couples who’d been gearing up for gay marriage to resume in California on Wednesday afternoon, a week after federal Judge Vaughn Walker ruled Proposition 8’s ban on same-sex marriage was unconstitutional. Arguments in the appeal will be heard the week of Dec. 6 in San Francisco.

A four-month delay may not seem that long, “But when you’re a couple that’s been together for 10 years, like Bill and I, that wait from August to December feels like five years. It’s not a few months,” said Masterson, who was planning to meet Horn at a county courthouse with their 2-month-old daughter on Thursday to tie the knot. “We’re emotionally devastated about it.”

However, even if the appeals court had allowed gay marriages to resume while Proposition 8 proponents launch an appeal, the struggle for marriage equality would be far from over, since same-sex couples would still be prohibited from exercising more than 1,100 federally protected marriage rights, according to same-sex marriage supporters.

“This journey to marriage equality is a marathon and not a 100-yard dash,” said the Rev. Susan Russell, senior associate for communication at Pasadena’s All Saints Church, which began blessing same-sex unions in 1992 and where 46 same-sex couples married during the six months in 2008 when gay marriage was briefly legal in the state.

But as the Proposition 8 drama plays out in the courts, it may serve as a test of how the justice system responds when a majority elects to strip a fundamental right away from a minority, a notion Walker’s ruling roundly rejected, according to Russell.

For Masterson and Horn, the waiting has been the hardest part.

All Saints parishioners who met 10 years ago, they would have gotten married along with 18,000 other same-sex couples during
the six-month window in 2008, which opened between the California Supreme Court’s invalidation of a previous voter approved same-sex marriage ban in May that year and the passage of Proposition 8 in November.

But the fact that they could not share 1,138 other federal rights bestowed upon spouses of opposite sex — from hospital visitation to shared property to joint bankruptcy filing — gave them second thoughts.

Then, 52 percent of voters said yes to Proposition 8 and marriage took on new meaning. “I didn’t realize how important it was until it was taken away,” Horn said.

Now, Horn and Masterson have adopted a child, which gave yet more meaning to the idea of having their union officially recognized.

So when news came Aug. 4 that Judge Walker deemed Proposition 8 unconstitutional because it denied gays and lesbians “a fundamental right without a legitimate (much less compelling) reason,” the couple geared up to go to the courthouse for the marriage certificate that would make their union official, only to learn that Walker had issued a temporary stay keeping his judgment from taking effect for six more days.

“I was sitting at home with our baby on my lap and I came to this realization that I was waiting to see if I am allowed to get married,” said Masterson, 36. “It was sort of like, gee, I hope I’m worthy.”

Last Friday, attorneys for Proposition 8 proponents ProtectMarriage.com filed a 96-page emergency motion pleading for the appeals court to stay Walker’s judgment while they pursued an appeal “to avoid the confusion and irreparable injury that would flow from the creation of a class of purported same-sex marriages,” they wrote, citing reports that West Hollywood and the county were posed to begin issuing same-sex marriage licenses as soon as Walker’s stay lifted.

The attorneys charged that Walker ignored “judicial authority, the works of eminent scholars past and present in all relevant academic fields, extensive documentary and historical evidence, and even simple common sense” in reaching his decision.

On Monday, the appeals court agreed and without explanation of its reasons granted the stay on same-sex marriages that will last until judges hear an appeal of Walker’s decision.

Proponents of Proposition 8, who largely relied on moral arguments in their failed district court case, have shifted their focus to the will of voters while railing against so-called judicial activism as the case enters the appeals process.

“California voters spoke clearly on Proposition 8, and we’re glad to see their votes will remain valid while the legal challenges work their way up through the courts,” Andy Pugno, general counsel for ProtectMarriage.com, said in response to the stay from the appeals court. “Invalidating the people’s vote based on just one judge’s opinion would not have been appropriate, and would have shaken the people’s confidence in our elections and the right to vote itself.”

But same-sex marriage supporters say that argument is a slippery slope, given that society would be much different today if some of the pivotal social issues this country encountered were left to voters alone, such as segregation.

“If this country legislated on opinion polls and votes, we might still not have bi-racial marriage,” Masterson said.

If gay marriage resumes in California, opposite-sex couples at All Saints might benefit too. When Proposition 8 passed, the church’s governing board voted unanimously to stop signing marriage licenses for all couples. But the board may revisit that decision depending on how the appeal shakes out, Russell said.

“We would love to get back to treating everybody equally, and we’re hopeful that’s what this decision is going to let us do,” she said.

The series of denials provoked an unusual act of catharsis for Masterson on Monday. After hearing the appeals court halted his marriage from going forward, he burned his marriage license application and posted a picture on Twitter, tagging it “Take THIS California.”

“We’re very disappointed,” he said. “We’ve waited such a long time to have a real marriage.
Posted by SUSAN RUSSELL at 1:02 PM

Mother/infant bonding is irreplaceable... seems somehow cruel, to erase that relationship... especially for personal gain -- poof! Your mother is gone.