Important information from Friends of Jake: 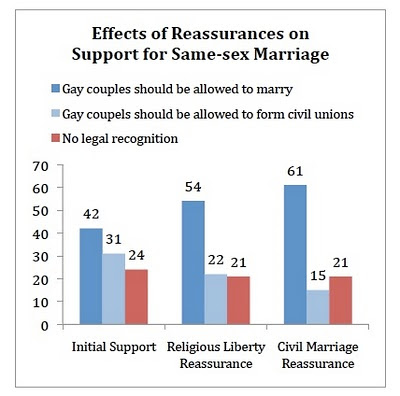 In a recent poll released by the Public Religion Research Institute, specifically about Prop 8, the pollsters found that support for marriage equality in the Golden State is around 51%. If, however, civil unions are an option, 42% support marriage, with another 31% for unions.

However, support for marriage increases with specific reassurances:

A significant number of Californians who initially say they support civil unions but not same- sex marriage are willing to support marriage equality if the law addresses either of two basic concerns about religious marriages. When presented with an assurance that the law would guarantee that “no church or congregation would be required to perform marriages for gay couples,” nearly one-third of Californians who initially only supported civil unions are willing to support marriage equality.

With this religious liberty reassurance, support for same-sex marriage increases 12 points, from initial support of 42% to a solid majority at 54%. Similarly, when Californians are presented with an assurance that the law “only provided for civil marriages like you get at city hall,” more than half of Californians who initially supported only civil unions are willing to support marriage equality. This civil marriage reassurance results in a 19-point increase in support for same-sex marriage, from 42% to more than 6-in-10.

To make this freedom explicit, CA State Sen Mark Leno introduced Senate Bill 906. The bill reaffirms the separation of church and state and clarifies under state law that no member of clergy will be required to perform a civil marriage that is contrary to his or her faith. The Assembly approved Senate Bill 906 with a 46-25 vote. The bill will return to the Senate for a routine concurrence vote before going to the governor’s desk.

Of course, the right wing opposes this bill, with lunatic arguments like these from a Roman Catholic opponent of SSM:

"SB 906 seeks to cause confusion by creating a new 'civil' class of marriage, implying it is different from religious marriage."

Response: Of course, there has always been a separate civil marriage, given that couples can be married by the county clerk with no religious expression at all.

"It also creates the illusion of new protections for 'religious' marriage by essentially saying that religions can't be forced to change their doctrine on marriage (which is already prohibited by the 1st Amendment).

Response: Yup, it does simply restate the 1st Amendment. It does this because the opponents to SSM apparently don't understand what religious freedom really means.

"It is clear this bill will be used to fool the voters into thinking that same-sex 'marriage' will have no impact on churches and people of faith."

Response: Umm, is that because it WON'T have any impact--except on those churches who WANT to marry same sex couples. They are panicked out of their mind to lose this favored talking point and spinning their wheels violently. Because if protections are explicitly stated, support for equality goes up.

Of course, none of this should be necessary. But the right wing has MADE it necessary, since they try to use this non-issue as a wedge.

So there you have it. Thanks to Friends of Jake for the update.

And --for me -- here's the bottom line: in order to keep moving forward toward liberty and justice for all we can't just be right about what the 1st Amendment protects. We have to be smart about how we respond to those who skipped the 9th Commandment and think lying is a Traditional Family Value. And SB906 is smart.

Posted by SUSAN RUSSELL at 8:44 AM

Of course Rome will turn around and consider civil marriages valid for purposes of their anti-divorce rules. What utter crud they push.