How'd I miss this one? "Leno Bill Passes in CA Assembly" 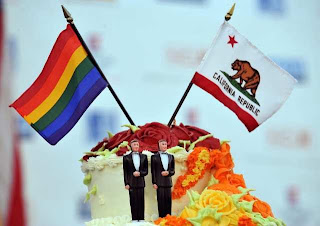 Assembly Passes Leno Bill Strengthening Religious Freedom
Thursday, August 19, 2010
SB 906 clarifies that no clergy member will be forced to perform any civil marriage that is against his or her belief system

SACRAMENTO – The California Assembly today passed legislation that clarifies the religious freedom of clergy members in California. The Civil Marriage Religious Freedom Act, authored by Senator Mark Leno (D-San Francisco), reaffirms the separation of church and state and clarifies under state law that no member of clergy will be required to perform a civil marriage that is contrary to his or her faith. The Assembly approved Senate Bill 906 with a 46-25 vote. The bill will return to the Senate for a routine concurrence vote before going to the governor’s desk.

“This bill simply affirms that California is a diverse state, and that we can all co-exist and make space for each others’ beliefs without compromising the tenets of any religious group or individual,” said Senator Leno. “With the recent federal court ruling, we know that marriage for same-sex couples in California is on the horizon. Under the Civil Marriage Religious Freedom Act, churches and clergy members who fear their religious views are threatened by marriage equality will have clear and solid protections under state law. In addition, churches that welcome same-sex couples will continue to fully recognize those families within their faith.”

In addition to strengthening religious freedom in state statute, SB 906 also clarifies the differences between civil and religious marriage in state law and protects churches from losing their tax-exempt status if they refuse to perform any civil marriage. The bill is sponsored by Equality California and California Council of Churches IMPACT.

“Opponents of marriage equality have falsely claimed that allowing same-sex couples to marry will force clergy to violate the tenets of their faiths,” said Geoff Kors, executive director of Equality California. “This bill should alleviate any concerns that restoring marriage equality will require clergy to perform weddings inconsistent with their faith.”

“Senator Leno's bill is essential to protecting our freedom of religion guaranteed by the First Amendment,” said The Rev. Dr. Rick Schlosser, Executive Director of California Council of Churches IMPACT. “It is as imperative that we protect the religious freedom to not solemnize marriages between same-sex couples for clergy and congregations who oppose it on the basis of their conscience or faith tradition as it is to protect the religious freedom of those who do support marriage equality to be able to solemnize all committed unions. California Council of Churches IMPACT represents faith traditions on both sides of this question and Senator Leno's bill perfectly codifies legal protection for all our faith communities,” he said.
Posted by SUSAN RUSSELL at 10:55 AM

This is legislation is a waste of time and effort. It accomplishes nothing! These freedoms are already guaranteed by the state and federal constitutions - no clergy person is ever required to solemnize a marriage in this country (unlike Great Britain where Anglican clergy are required to do so on demand by any person living within their parish boundaries). This is simply an opportunity for politicians to claim that they did something to appease the bigoted opponents of marriage equality. A complete waste of legislative time and the state's short-supply of money (required to pay for publication of the law, reprinting of statute books, salaries of staffers spent on these activities, etc.)

Of course, the right wing opposes this bill, with lunatic arguments like this one from a Roman Catholic opponent of SSM:

"SB 906 seeks to cause confusion by creating a new 'civil' class of marriage, implying it is different from religious marriage.

Of course, that has always been the case, given that couples can be married by the county clerk with no religious expression at all.

It also creates the illusion of new protections for 'religious' marriage by essentially saying that religions can't be forced to change their doctrine on marriage (which is already prohibited by the 1st Amendment).

Yup, it does simply restate the 1st Amendment. It does this because the opponents to SSM apparently don't understand what religious freedom really means.

It is clear this bill will be used to fool the voters into thinking that same-sex 'marriage' will have no impact on churches and people of faith."

Umm, is that because it WON'T have any impact--except on those churches who WANT to marry same sex couples.

They are panicked out of their mind to lose this favored talking point. Because if protections are explicit, support goes up. See upcoming post at FoJ.

And couldn't disagree with you more.

Of course those freedoms are already guaranteed. But that didn't keep the "Protect Our Marriage/Screw Your Marriage" folks from using an attack on religious freedom as one of the foundational fictions of their successfull campaign against equality.

This bill is a savvy, well crafted, well timed piece of legislation that gives the the bigots one less leg to stand on and gives the under-informed public one more reason to move where they're moving: to the side of equality.

Time and money well spent as far as I'm concerned.

The Roman hierarchy's argument is about the silliest crap (you should pardon the word) that I read in years. So if they are not protected they are victims and if they are protected the bad nasty activists are attacking marriage. Sheesh!