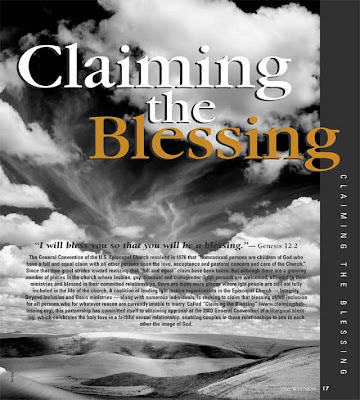 “History belongs to the intercessors, who believe the future into being.” -- Walter Wink

Eight years ago this very day -- August 1, 2002 -- Claiming the Blessing (CTB) made its official "launch" as it moved into the office space provided by All Saints Church in Pasadena and began its work with a dripping-wet-behind-the-ears Executive Director.

The seed of the CTB collaborative work had been planted after Lambeth 1998 at a "where do we go from here?" meeting of Lambeth Conference Survivors at Vails Gate ... and continued to germinate over a series of meetings with stakeholders and leaders committed to the full inclusion of LGBT people in the work and witness of the Episcopal Church.

I joined the party a little late ... coming into the conversations in 2001 as the chair of the our diocesan Bishop's Commission on Gay & Lesbian Ministry. And I'm remembering tonight one particular gathering -- sitting around a big conference table at the College of Preachers in Washington DC with Elizabeth at the newsprint capturing the brainstorming of an amazing cloud of witnesses believing a future of fuller inclusion into being.

And while there are miles to go before we rest, I really think if you'd taken a poll in that room that day there weren't too many of us who would have predicted that we'd be blessed to be part of accomplishing so many of the goals Elizabeth outlined on that newsprint that day.

(Well, maybe Ed. There's a cockeyed optimist in every crowd!)

Eight years. That's two presidential administrations. That's twice as long as we were in high school. (Remember when four years seemed like a lifetime?) And the work we've done together -- which isn't finished yet, I hasten to note -- has been as much a blessing as it has a challenge.

There's a lot more to write. To reflect. And I hope to have the chance to do some of that this week as we prepare for a CTB Steering Committee meeting in Fort Worth August 5-7. But for the moment, just marking the moment seems sufficient.

So stay tuned. And keep believing the future into being.

Posted by SUSAN RUSSELL at 9:23 PM