An Ode to Fish Who Know They're Wet

I tried Googling the quote but couldn't find an original source. But since I heard it first from Michael Battle I'm giving him credit for it. And the quote is: 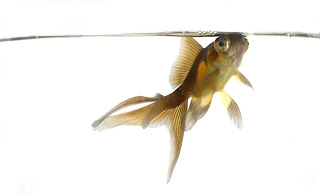 I first heard him expand on the concept a few years ago when he was our keynote speaker at Diocesan Convention. And it came to mind this last Saturday as I spent the morning in the parish hall at Ascension Church in Sierra Madre doing the every-five-year refresher course in misconduct awareness training mandated by my diocese.

The trainer was another Michael -- Michael Bamberger -- the rector of Ascension and the Dean of our Deanery -- an openly heterosexual, white, male, Nashotah House Episcopal priest. And he introduced the four hour session by talking a little about the changes he's seen in his life in the church.

"We are here," Michael said, "to make the church not just a safe place but a healthy place."

"And to do that we have to recognize that we do ministry on a playing field that is not always level," he continued. "What makes the field uneven is the balance of power we bring into relationships with each other. And what we're here to learn today is how to intentionally take care of that imbalance of power and to own our responsibility for maintaining the integrity of relationships by being attentive to the needs of others over our own."

"What I've had to learn," he said, "is that men are mostly clueless about the inherent power their gender gives them. And it took me a while because I grew up in a church where that power was so unquestioned -- where the sexism was so normative -- that there was literally no awareness of the power differential."

"And that," said Michael, "is where the danger is: it's when we don't recognize the power we have."

AKA: When fish don't know they're wet.

"What is or is not offensive," said Michael, "is determined by the person who's been offended. Not by the person with the power to offend. And in order to make this church not just a safe place but a healthy place, we've had to attend trainings like these to recognize the power we didn't know we had, we've had to change our behavior and -- in some cases -- to make amends to those we've offended by abusing the power we didn't know we had."

Michael Bamberger is a fish who knows he's wet. Scott Richardson is another. In his sermon here at All Saints on August 22nd, Scott offered another one of those quotes that stay with you. He said:

He was talking about those who tried to shame Jesus for healing on the Sabbath -- for violating the letter of the law in order to incarnate its spirit. But in his illustration he talked about those with power who try to shame the powerless for daring to speak up -- to stand up -- to aspire to wholeness. That shaming into silence is the language of oppression -- and it manifests itself in oh-so-many ways.

Making the woman who dares to point out the uneven playing field the problem -- the issue -- the troublemaker. The boat rocker. The attacker. And sometimes it's just too hard. Too much trouble. It seems that nothing will change anyway so why bother. And so rather than drown in the water of sexism, they choose silence and let the fish in charge continue to swim about -- clueless about the fact that they're wet.

But here's my word of hope and encouragement for those who need it. (And I know from my email inbox and my Facebook message center that you're out there.)

There are fish who know they're wet. And they are allies in this struggle to build a church that isn't just safe but to build a church that's healthy. For everybody. Where nobody is shamed into silence for speaking their experience. And where those with power take responsibility for maintaining the integrity of relationships by being attentive to the needs of others over their own.

AKA "Thy Kingdom come on earth as it is in heaven."

So let's hear it for guys who get it. For Michael. And Scott. For Albert and Jim and Abel and Bruce and Ed an ... well, you add your own names. And then let's work together to overcome the fear, anxiety and denial that still gets in the way in too, too many places.

I know it isn't going to be easy but I know it can be done. I know because of what I learned on Saturday from an openly heterosexual, white, male, Nashotah House Episcopal priest. From a fish who knows he's wet.
Posted by SUSAN RUSSELL at 5:45 PM

Yeah, that's why we love listening to Scott on Sundays! (when he's not galavanting around Pasadena with you lot! :-)
Thanks, Susan