The place to be tomorrow night: Olvera Street 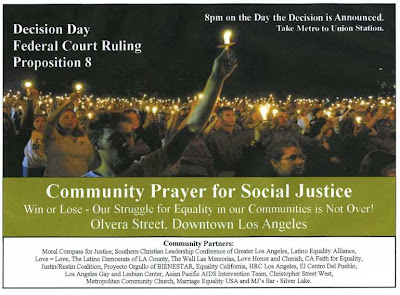 Prop. 8 Court Decision Response:
Over 15 LGBT and Ally Community Groups will gather at Los Angeles’ Center
in a Union of Communities Working Together for Social Justice

What: Los Angeles Rally and Community Response to Prop. 8 Ruling
Members of Latino, Asian/Pacific-Islander, African-American, Middle-Eastern, LGBT and other communities gather to show their solidarity for social justice after the District Court announces its decision on Proposition 8, the California legislation that bans marriage between same-sex couples.

Why: Proposition 8 has the unique quality in that it denies Lesbian, Gay, Bisexual & Transgender individuals, that come from every neighborhood in Los Angeles and from across the world, from marriage. Individuals of any religion, race, ethnicity, or gender, can agree that excluding any group of people from participating in society is wrong. The event will be held on Olvera Street as a tribute to the deep roots of diversity in Los Angeles.

“Community groups continue the hard work in our people of color communities to increase acceptance for LGBT people and issues. In spite of the court’s decision in our favor or not, this trial is not a "Mission Accomplished," explained Ari Gutierrez, Co-Chair of the Latino Equality Alliance. “Community groups gather on the day of the decision at Olvera Street to recommit to the necessary public education work and invite other social issue advocates to join in a shared prayer for social justice,” she added.

San Diego will meet at 6th and University at 6pm and march to the Center.

C'mon San Diego, we were the biggest post-Prop8 protest march in the country....let's show LA how it's done!