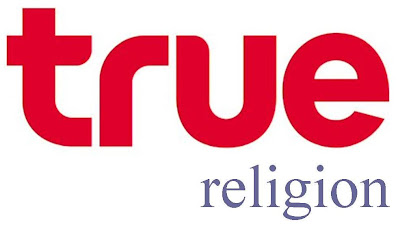 I know it's only Thursday ... but True Religion Sunday is just around the corner.

Now your calendar might just say Sunday, August 29th -- or it may also say the 14th Sunday After Pentecost: 17C ... but mine says it's "True Religion Sunday" because of this Collect of the Day:

God of all power and might, the author and giver of all good things: Graft in our hearts the love of your name; increase in us true religion; nourish us with all goodness; and bring forth in us the fruit of good works; through Jesus Christ our Lord, who lives and reigns with you and the Holy Spirit, one God for ever and ever. Amen.

And I am not preaching this Sunday. So of course I'm thinking about what I would be saying anyway. And in the process came across this fun fact to know and tell: Did you know there's a brand of jeans called "True Religion." Well, you do now.

But that's not the kind of true religion I'm thinking about. This is:

Whenever we talk about “true religion” I think it bears repeating that the word “religion” turns out to have the same root as the word “ligament” – that which “binds together” – and one of its dictionary definitions is “that which binds together people in their quest for the divine.”

"That which binds together people in their quest for the divine."

I could end with "from our mouths to God's ears" but on this one God isn't the one who needs to be listening.

The ones who need to be listening are the folks who've decided to focus on beating people up rather than binding people together. On excluding rather than including. On questing for power rather than for the divine. On everything that isn't true about religion.
So let's hear it for true religion: the kind that binds together people in their quest for the divine. That's what we'll be praying for an increase of on Sunday. Won't you join us?
Posted by SUSAN RUSSELL at 4:14 PM

one of my favorite collects in the church year, probably thanks to you. It works well, too, with all these lessons about feeding and being fed - that's something that binds us together, to be sure.

Thanks for the sermon. Great thoughts -- and just the right length.