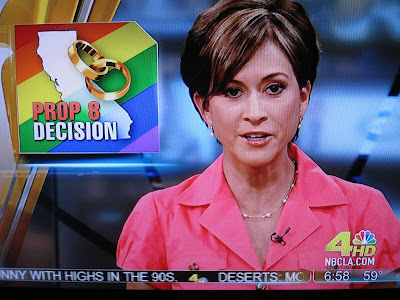 They've been calling it "Decision Day" ... and we've been waiting for it ever since U.S. District Court Judge Vaughn Walker heard the closing arguments in the Prop 8 trial (officially know as Perry vs. Schwarzenegger) in June.

It's been kind of like waiting for "the other shoe to drop" -- with no clue as to when that would happen. There were lots of rumors and conjectures and imaginings about when the decision would come. And while we were conjecturing and imagining the announcement came -- yesterday -- that the shoe would drop today.

Predictions are that the decision will be in our favor. And not just because we're right -- but because attorneys Olson and Boise clearly "made the case" that Prop 8 was an egregious violation of the 14th Amendment's guarantee of equal protection. (A big clue is that the defendants have already filed their petition to stay the decision pending appeal.)

Whatever happens today, everybody knows this is headed to the Supreme Court. And there is some good news to report from that corner of the kingdom (from the Wikipedia article on the Perry case:)

Ginsburg rejected that distinction, noting that with respect to sexual orientation the court has "declined to distinguish between status and conduct" and offering an analogy from an earlier opinion: "A tax on wearing yarmulkes is a tax on Jews."

An inch here and an inch there. And we're gonna keep on marchin' forward.

Because this journey toward justice isn't a 100 yard dash ... it's a marathon. And like those who stand on the sidelines and hand out the water and shout out the encouragement to marathon runners, today we're looking for some water and a shout out from Judge Walker. Claiming my scriptural heritage, I'm looking for the water that rolls down like justice ... the living water of God's love, justice, truth and compassion for ALL humanity.

PS -- If you're in the L.A. area, do consider joining us at Olvera Street tonight for the Community Prayer for Social Justice Rally.

Posted by SUSAN RUSSELL at 7:21 AM